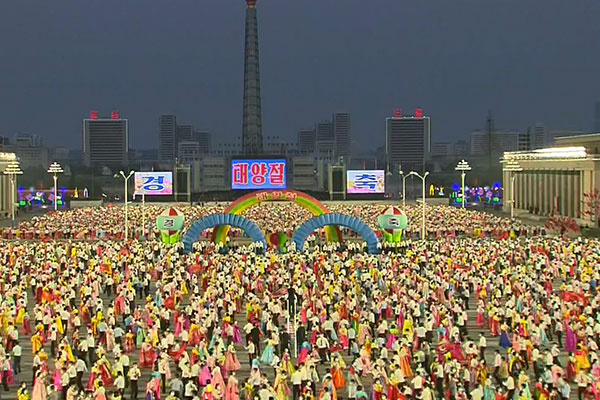 North Korea on Friday celebrated the 110th birth anniversary of its late founder Kim Il-sung with an array of events but no military parade.

North Korean state media said that leader Kim Jong-un attended a mass rally held at Kim Il-sung Square in Pyongyang on Friday involving tens of thousands of people, but did not report on his remarks.

Kim also visited the Kumsusan Palace of the Sun, the mausoleum where his late grandfather and father lie in state.

On Friday evening, North Korean media broadcast live events marking the Day of the Sun held in the capital city.

At a youth banquet, tens of thousands of young people were seen dancing during a fireworks display.

After attending the daytime rally, Kim did not appear for the evening events.

For the 100th and 105th anniversaries in the past, the North held massive military parades showcasing new weapons and Kim's speech was publicly aired.

This year, the regime appears to be focused on festivities rather than flaunting its military power.

However there's a possibility the North may engage in military moves such as parades or nuclear testing in the coming days as April 25 marks the North Korean army's founding anniversary and a new government takes office in South Korea next month.