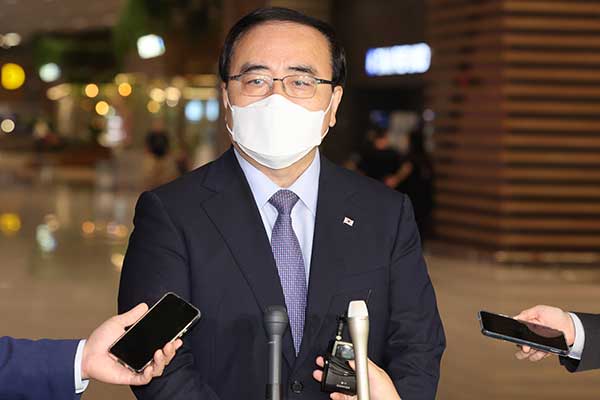 South Korea’s top presidential security official says that South Korea, the United States and Japan will work with the international community for a tougher response should North Korea conduct a seventh nuclear test.

National Security Advisor Kim Sung-han unveiled the stance to reporters at Incheon International Airport on Friday, upon his return from a security meeting involving the three countries in Hawaii.

If North Korea goes ahead with a seventh nuclear test, Kim said, it won’t simply be a matter of “six plus one more.”

He noted that Pyongyang has already finished preparations for another nuclear test, as he repeatedly mentioned. As such South Korea, the U.S. and Japan discussed during their latest trilateral security talks how to work with the international community to formulate a collective response in the event of a fresh round of the regime's nuclear test.

Kim added that the three countries, which share similar views and values in terms of strategies related to North Korea, did not mince words when discussing numerous pending issues.

As for the U.S. Inflation Reduction Act, Kim said Washington promised to closely examine the short-term impact of the law on both South Korea and the U.S. at the level of the national security council and to notify Seoul of the result.

Kim said the U.S. and Japan voiced full support for Seoul’s “bold initiative” to coax North Korea to return to talks and denuclearize, with the three countries agreeing on close cooperation for the solution of the North Korean nuclear issue through dialogue.