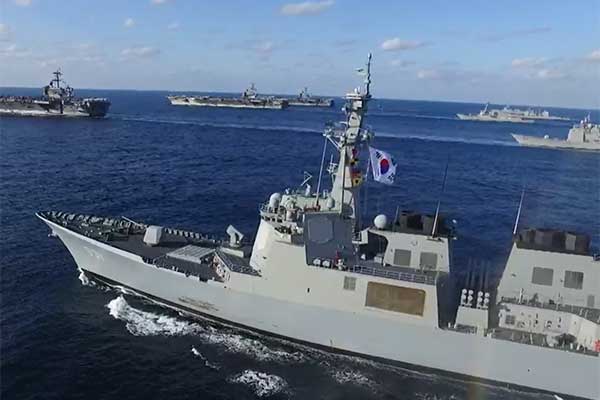 North Korea has strongly condemned the United States for redeploying a Nimitz-class aircraft carrier to waters east of South Korea.

The North Korean foreign ministry issued the criticism in a public notice on Thursday, a day after the USS Ronald Reagan returned to the East Sea for a joint drill with South Korea and Japan in response to the North's launch of an intermediate-range ballistic missile(IRBM) on Tuesday.

In the public notice carried by the North's official Korean Central News Agency, Pyongyang's foreign ministry said that the North is closely watching as the U.S. poses a "grave threat" to stability in the region by redeploying the carrier near the peninsula.

The ministry then strongly condemned the U.S. and other countries for seeking measures by the UN Security Council against the North Korean military's legitimate measures in response to joint U.S.-South Korea drills that raise tensions on the Korean Peninsula.

The nuclear-powered Ronald Reagan aircraft carrier left South Korean waters last Friday after a joint exercise with South Korea and Japan but was quickly ordered back to the region after the North fired an IRBM over Japan on Tuesday.