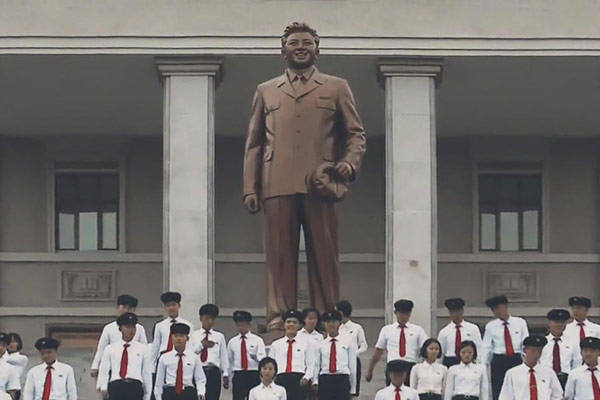 After the Cold War came to an end in the early 1990s with the dissolution of the Soviet Union, North Korea became less dependent on and less interested in Russia. Accordingly, English became the first foreign language, while the number of students studying Russian continued to fall. Today, the Russian language is hardly taught at general schools.

When North Korea maintained close relations with the former Soviet Union, Pyongyang stressed the need for Russian language education because it was important to translate the Soviet Union’s science and technology books and engage in relevant diplomacy. In 1964, the North greatly strengthened foreign language education by teaching Russian and English at junior high schools and also encouraged college students to master at least two foreign languages before they graduated. Around that time, the foreign language division at Kim Il-sung University was re-established as the Pyongyang University of Foreign Studies.

From 1977, foreign language education expanded into French, German, Spanish, Japanese and Chinese. Beginning in the 1990s, the language education focus shifted from Russian to English. The main reason was the collapse of the Soviet Union, but there was another reason that the North put so much emphasis on English education.

In a book titled “Art of War,” legendary Chinese military strategist Sun Tzu wrote, “If you know your enemy and yourself, you can win every battle.” In other words, you should know your enemy and also the enemy’s language in order to win. For North Korea, the enemy here refers to the U.S.  Moreover, English is an international language. Without knowing English, no country can voice its opinion properly on the international stage. For these reasons, North Korea began to teach students English in earnest. Foreign language education was conducted during the years of former leaders Kim Il-sung and Kim Jong-il.

But since Kim Jong-un took power, the North has spent much more time in teaching foreign languages, by using tools such as computers, with clear educational goals in mind.

North Korea believes that it should learn English in order to compete with the U.S.—an enemy that it has confronted since the Korean War.

After Kim Jong-un came to power, North Korea enacted educational reform and designated English as a required subject. With a 12-year compulsory education system in place, students take English classes from the fifth grade. It is said that students attending the Pyongyang Foreign Language Institute or Pyongyang University of Foreign Studies have an excellent command of English.

Many people mistakenly believe that North Koreans are not good at English. This is not true. On the contrary, students who have been trained at foreign language schools are well versed in English. Their conversation skills are outstanding, as focus is placed on how proficiently they can communicate with foreigners.

At the Pyongyang Foreign Language Institute, students have to read something out loud for 30 minutes before the class starts. In the so-called “morning reading” session, they read what they want, with the classroom doors wide open. The principal or the vice principal passes by the noisy classrooms to see if the students are doing their jobs properly. Students are taught British pronunciation, since good pronunciation is considered important. After memorizing the textbook, the students are required to summarize the content in their own words and not repeat the sentences from the book. This process is called “retelling.”

The institute encourages students to speak in the language they study in their daily lives. English education, in particular, helps students communicate with foreigners. In order to improve their students’ speaking skills, the institute often shows them American or British movies, which are strictly banned outside the school. The five-year Pyongyang University of Foreign Studies produces hundreds of students with two or three foreign language certificates each year, with the purpose of nurturing experts specializing in multiple languages.

Former North Korean ambassador to Spain Kim Hyok-chol graduated from these two schools. Kim participated in working-level negotiations with the U.S. in Pyongyang in February of this year with his American counterpart Stephen Biegun.

North Korean universities, in general, have students learn English as their first foreign language and let them choose the second language whether it be Chinese, Russian and Japanese. Most of the students choose Chinese.

After the severe economic contraction in North Korea in the mid-1990s, the state rationing system became useless as it could no longer provide food to people. The North couldn’t produce things internally, either, due to the economic crisis. The country had to find a way to survive through foreign trade, and it became increasingly dependent on China.

The Chinese economy has grown rapidly since the early 2000s, with North Korea’s trade with China increasing as well. North Korean people, meanwhile, had to survive on their own by engaging in market activities. Chinese products accounted for more than 80 percent of the goods traded at private markets in North Korea, while commercial transactions with Chinese traders expanded. As a result, North Korean people began to show a keen interest in China.

English and Chinese are the two most popular foreign languages in North Korea.

Chinese, in particular, is often the language of choice these days due to the close economic relations between the two communist allies. China is responsible for more than 90 percent of the North’s foreign trade, while many North Korean residents have conducted business with Chinese traders to secure products since the so-called “Arduous March” period in the mid-1990s. Amid brisk trade between North Korea and China, some affluent families in the North hire private tutors to teach their children Chinese, while students in the English department at the Pyongyang University of Foreign Studies teach English to teenagers in the upper class. The private education market for foreign languages is seemingly enjoying a boom in the communist state.

As language skills are directly related to one’s future, foreign language education fever is likely to continue in North Korea.

College graduates in North Korea can all get jobs, but the quality of the job is more important. Those who have a good family background and are also proficient in foreign languages can be dispatched overseas or work at the Foreign Ministry. Leader Kim Jong-un himself studied abroad and he is well aware of what is necessary to go global. North Korea also hopes to demonstrate itself as a normal state to the outside world. During the Kim Jong-un era, the North has strengthened the policy of fostering science and technology. For its own scientific development, the North needs to examine the research projects of foreign scholars first. In this respect, North Korea will continue to focus on teaching foreign languages, including English.

North Korea is spurring efforts to become a normal state by shedding its previous image as a poor, abnormal country. As part of those efforts, the country is strengthening its foreign language education. It remains to be seen if this initiative will help the North take a major leap forward.