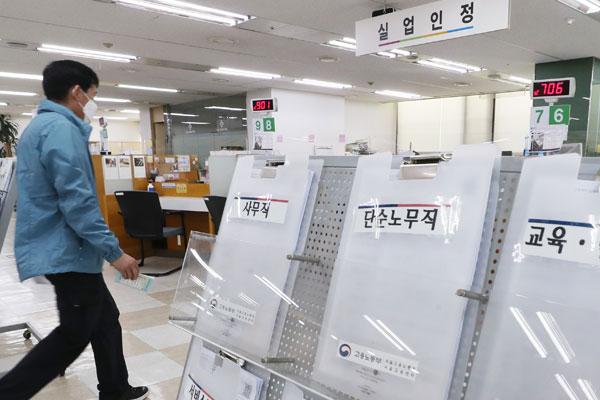 Statistics Korea announced on Wednesday that the number of employed people dropped by 476-thousand in April from a year earlier. The figure represents the worst monthly drop since February 1999, when the country was reeling from the IMF bailout crisis.

The extensive impact on the labor market was attributed to a plunge in spending.

"Jobs fell by 212-thousand in the accommodations-restaurant sector, 130-thousand in education and 123-thousand in retail sales sectors... "

"As people have been avoiding gatherings or going outside to prevent the spread of COVID-19, and tourists to the country fell drastically, jobs decreased in lodging and restaurant businesses in addition to the decline in education services."

During Wednesday's briefing, Eun Soon-hyun, director of the social statistics department, told reporters that the situation could improve next month.

"As for the upcoming May figure, the government is holding a Green Room meeting and discussing various response measures, including employment maintenance subsidies. Meanwhile, some parts of the public health sector are partially reopening non-face-to-face services. Despite these predictable factors, we cannot say it's going to be better or worse, but please note that related government efforts are under way."

Finance Minister Hong Nam-ki on Wednesday presided over the economy-related ministers' meeting in the Green Room and discussed the government's plan to create more than 550-thousand jobs.