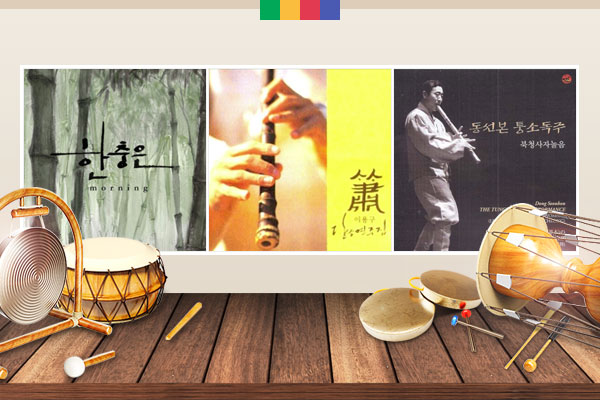 Musical instruments were quite valued during the Unified Silla period, so much so that instruments like the geomungo거문고 or the manpasikjeok만파식적 were kept in a special warehouse called a Cheonjongo천존고. There used to be three iconic string instruments – the gayageum가야금, the geomungo and the bipa비파 - and three wind instruments made out of bamboo – the daegeum대금, the junggeum중금 and the sogeum소금. The gayageum, geomungo and daegeum are still widely played. People have forgotten how to play the bipa, but Korean musicians have referred to the Chinese bipa playing techniques and applied them to Korean music. Unfortunately, the junggeum has disappeared from today’s selection of wind instruments.

Meanwhile, the sogeum is an interesting case, since the original sogeum disappeared in the Unified Silla period. The one that is played in Korea today is a modern invention that just took the name sogeum. The modern sogeum has no cheonggong청공, a component typically featured in other traditional wind instruments. A cheonggong, meaning a “clean-sound hole,” is a small hole in between the embouchure hole, where the air is blown into, and the finger holes, which are manipulated by the fingers to make sounds. A thin membrane covers this cheonggong, thereby creating a vibrating sound unique to the daegeum. This is why some people prefer the clear sound of the sogeum to the daegeum’s, sometimes irritating, resonance. Now let’s listen to a sogeum piece titled “A Song for Ran” performed by Han Chung-eun.

The three well-known traditional wind instruments are categorized by size. The smaller the instrument, the higher notes it can play. The sogeum can make the highest sounds among all the wind instruments played in Korea today. Another instrument that has a similar tone to the sogeum is the danso. The danso is small in size and easy to learn, so it is often taught to elementary school students. Unlike the sogeum, which is a transverse flute, the danso is held vertically like an oboe or a recorder. It only has five finger holes, making it difficult to produce a wide range of sounds, but it has no problem playing traditional Korean folk songs. Danso’s timbre goes well with that of the saenghwang생황, a free-reed mouth organ, and the two instruments are often played together in instrumental pieces such as Suryongeum수룡음. The second piece of music we’re going to hear today is a danso piece titled “Spring at a Guard Post,” written in 1965 by a North Korean composer by the name of Kong Yong-song공영송. It was adapted into a gayageum piece before it was popularized in South Korea, and it was again adapted into a danso and string quartet piece. Today, Lee Yong-gu plays the danso and Moon Yang-sook, the gayageum.

The danso was created at the end of the Joseon period, while the tungso퉁소 has been played since the Goryeo era. The instrument was so widely played that it was even featured in an old Korean proverb “a tungso inside a room” to indicate a person who is clueless outside of his own small circle. During the Joseon Dynasty, the tungso was a part of the court orchestra that played Jongmyo ceremonial music. However, the instrument came to be played less and less. In recent years it became a special instrument that is played only for the Bukcheong북청 lion dance that originated from Hamgyeong-do함경도 Province in Korea’s northeastern region. Fortunately, the tungso has more performance opportunities as young traditional musicians began incorporating the tungso in their creations. Let’s wrap up this week’s Sounds of Korea with tungso virtuoso Dong Seon-bon and Koh Jang-wook performing “Lion Dance” and “Payeongok” from the Bukcheong Lion Dance.