US Defense Secretary Hints at Rearranging US Troop Deployment Worldwide 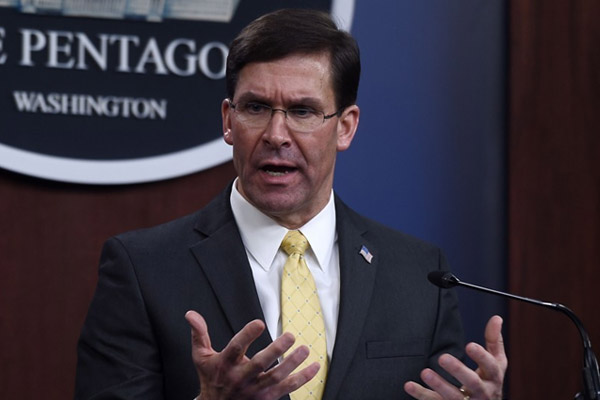 U.S. Secretary of Defense Mark Esper says no specific instructions have been issued to reduce the size of American forces on the Korean Peninsula but U.S. troop deployment might be rearranged around the globe. The remarks were in regards to a recent report that said the Pentagon presented the White House with options to reduce troops in South Korea in March.

Question: Is there any truth to these media reports? Is the Pentagon and the president considering any reduction or withdrawal of U.S. forces?"

Esper: "I've issued no orders to withdraw forces from the Korean Peninsula... "

U.S. Defense Secretary Mark Esper said he has not issued orders to reduce troops in South Korea but left the door open for such a move in the future.

"So we need to look at the adjustments, every command we have in every theater, to make sure we are optimizing our forces, while we're moving toward additional concepts, new concepts such as dynamic force employment, and I continue to pursue more rotational forces, force deployments into theaters because it gives us the United States greater strategic flexibility in terms of responding to challenges around the globe.”

During an online event hosted by the International Institute for Strategic Studies on Tuesday, Esper addressed recent speculations of a U.S. troop drawdown in Korea following a recent media report that the Pentagon provided the White House with options on the matter.

Esper and South Korean Defense Minister Jeong Kyeong-doo held telephone talks just one day before, and Seoul said that adjusting U.S. troop levels was not on the table.

"I think the secretary's comments on Korea were pretty clear. That's a continuous process, that we're going to do that, we'll do that in conjunction with our allies, and we'll have recommendations that we may make in the future."

This comes as Seoul and Washington are struggling to narrow gaps on how much each side should pay for the upkeep of some 28-thousand-500 U.S. troops in Korea.

After the two sides failed to renew their previous deal that expired last year, a White House official confirmed that Trump is demanding Seoul pay one-point-three billion dollars annually, which is 49 percent more than Seoul agreed to during the last defense cost talks.

“This includes working alongside South Korea to achieve the final fully verified denuclearization of North Korea, and then enduring peace on the Korean Peninsula."

Despite seeking strategic flexibility, Esper also made it clear that the end goal remains solid in the Northeast Asian region.