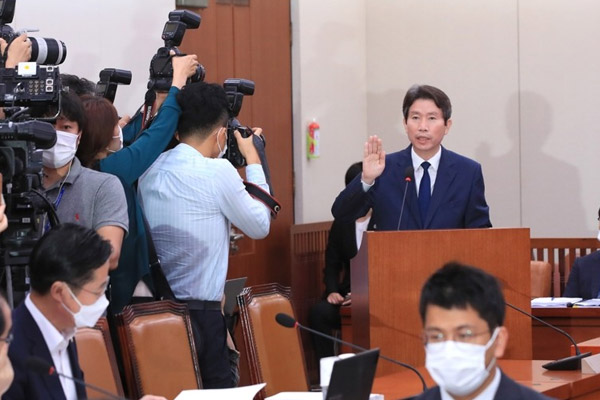 At his parliamentary confirmation hearing Thursday, Unification Minister-nominee Lee In-young stressed that inter-Korean ties should move forward even amid strained Washington-Pyongyang relations. However, before examining his vision and plans, opposition lawmakers sought to make sure the nominee had given up the pro-North Korea inclinations of his student activist days in the 80s.

Rep. Thae Yong-ho: "Are you still a follower of [North Korea's] Juche ideology? Is it hard to honestly tell the public if you have discarded the ideology?"

Rep. Lee In-young: "I was not a follower of the Juche ideology even then and I do not believe in that idea now."

Unification Minister-nominee Rep. Lee In-young led the National College Students' Council, an association of student activists regarded by many as pro-North Korea, in the 1980s.

At his confirmation hearing on Thursday, North Korean defector-turned-lawmaker Thae Yong-ho and other main opposition representatives grilled the nominee over whether he has given up communist ideologies.

Rep. Thae Yong-ho: “I declared my ideological turnaround. Have you ever stated that you have discarded the Juche Ideology of [North Korea] or that you are no longer a follower of the ideology? Has there been a public statement?"

Rep. Lee In-young: "... That is an inappropriate question." "It only shows your lack of understanding of South Korea’s democracy if you are asking me whether I made an ideological turnaround."

The four-term lawmaker Lee said he never followed North Korean ideology. In his opening speech, however, he admitted that he was once reckless due to his passion for unification, claiming that the past led him to come this far.

"Since my nomination, I have looked back on a wish I've had since my youth for a peaceful unification and the past days when I devoted myself to realizing such a dream. There were times when pure passion was ahead of action. But that passion led me to have great interest in inter-Korean ties and unification, to become aware of the call of the times and stand here today."

His vision today includes a long-term unification plan through 2045.

"I will actively make bold changes to redirect focus from the 'time of North Korea and the U.S.' to the 'time of the two Koreas.' In order to achieve that, we need to take a new approach towards the North with creativity and imagination."

"In the 'process towards unification,' I pledge to draw up a four-step roadmap for a peaceful economy with the people, so that the two Koreas can coexist and prosper together by 2045, the centennial of Korea's liberation from Japan's colonial rule."

Amid the strained inter-Korean relations, the nominee said if Seoul and Washington flexibly adjust the size and method of their joint exercises scheduled for next month, North Korea will positively respond to the change.

On the controversial issue of whether to keep U.S. forces in South Korea, the nominee agreed on the need, noting the significance of the alliance in the Northeast Asian power balance.