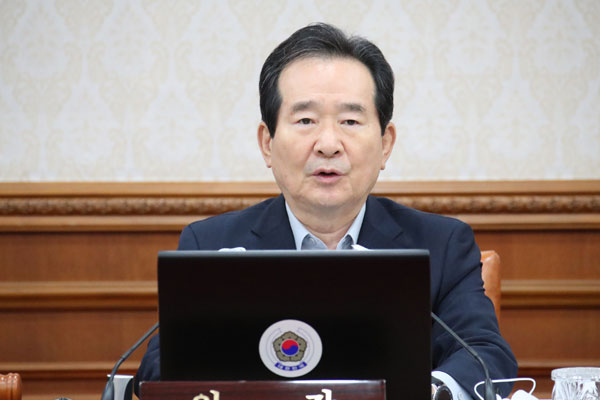 South Korea has prepared a nearly 556 trillion won, or some 469-billion dollar, budget for the year 2021 to save the pandemic-stricken economy.

Deputy Prime Minister Hong Nam-ki held a briefing on the budget, which is eight-and-a-half percent bigger than this year's.

"The budget proposal for next year is eight-point-five percent higher than this year at  555-point-eight trillion won to overcome the COVID-19 crisis, and to pursue Korean New Deal projects and other investment needs of the state tasks. That's one-point-six percent higher if you factor in three supplemental budgets put in place this year."

"Once the embers out put out, it is difficult to revive them no matter how hard you blow with the bellows. With an active fiscal policy, the government will revive the embers of the economy and boost the momentum of economic recovery."

However, the massive budget will inevitably hurt fiscal health.

"The [expected] revenue next year is going to be only point-three percent higher at 483-trillion won. Accordingly, the national debt will rise to 46-point-seven percent of the GDP from this year.... "

While approving the budget proposal to the National Assembly at the Cabinet meeting, Prime Minister Chung Sye-kyun noted there are no other choices.

"The budget plan will be submitted to the National Assembly the day after tomorrow. Now is a semi-war situation, in which fiscal spending must buttress the national economy as well as the public livelihood. I ask for the National Assembly's proactive support so that crisis responses can be pursued without disruption."

According to the Bank of Korea, the national economy shrank more than three percent in the second quarter.