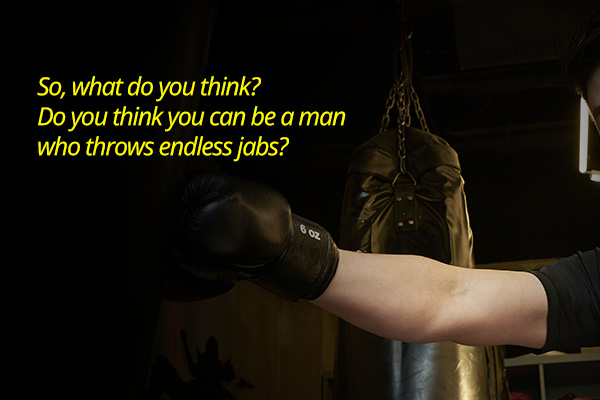 “Whether inside the ring or out in the world, there is not a safe place. Tap, tap, you’re safe only in the space you create for yourself with jabs. That’s where the fight begins. Your opponent is worked up because you’re in his space. He is fired up, but you remain cool because you’re just taking cherry tomatoes out of the refrigerator. You have to remain calm enough to take the cherry tomatoes even when the opponent’s face gets all bloody. Fighting is that ruthless. So, what do you think? Do you think you can be a man who throws endless jabs?”

“What if I can’t throw endless jabs?”

“There is a great technique called holding. You hold onto the opponent no matter what. If you keep a hold on him, he can’t hit you no matter how much he hates you. You can’t hit him, and he can’t hit you. Nobody can do anything.”

“I couldn’t knock him out, but I’d say that I won on points.”

“There is no such thing as winning on points in fights. You either KO someone or get KO’d yourself.”

I looked up at the ceiling to figure who got knocked out by my blows.

In this story, boxing is like life. We have a great enemy we have to face in our lives. In this story, there is a force that threatens the boy’s freedom. He has to face the institution of school represented by the founder’s statue or a teacher like Silica Gel. The boy is learning from boxing how to deal with such great forces, how to survive through jabs and holds, and ensure one’s space, find the reason to live, and how to wait patiently and remain guarded until the very end when he is ready to defeat the opposing forces with one last blow.

These days I drive a truck delivering live fish. I can’t say it’s a great job because the pay isn’t good, and I have to drive on the highways mostly at night. But then it’s not a terrible job either. The work is hard but unlike in most jobs, I don’t have a boss who nags me, and I can listen to music while driving.

By the time I turned thirty, I was so preoccupied by trivial things that even if I came across a truckload of dynamites, I couldn’t be bothered to blow up the world.

So, throwing jabs couldn’t be farther from my mind. I felt like I was being beaten up by someone every day but when I look back, it was a quiet world where nobody was throwing any punches, leaving me to wonder where I should be landing jabs at.