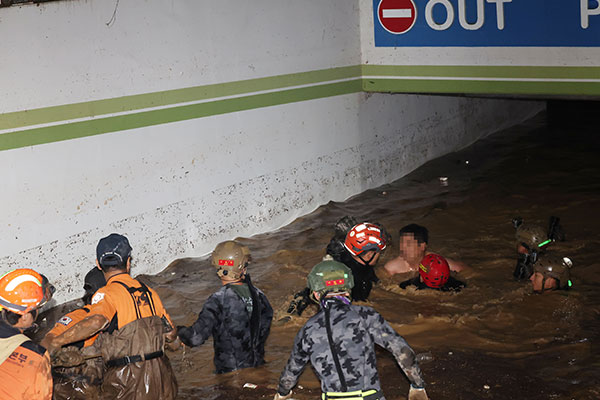 After approaching the Korean Peninsula from south-southwest of Jeju Island, the strongest tropical storm of the year made landfall near Geoje in Gyeongsang Province at 4:50 a.m., moving north-northeast through the province toward the city of Pohang, where it wreaked havoc to the tune of nearly 200 billion won, or almost 145 million U.S. dollars, in damage.

After swirling over the peninsula for approximately two hours and ten minutes, Hinnamnor escaped off the shores of Ulsan on the southeast coast at around 7 a.m. on a northeastern trajectory into the East Sea.

At 9 a.m. on Thursday, the Central Disaster and Safety Countermeasures Headquarters suspended its highest level of emergency response posture put in place as the tropical system hit, also lowering its typhoon advisory one notch.

The agency has reported eleven deaths resulting from the storm, while search and rescue operations continue for one person still missing in Pohang, where the typhoon inflicted the most damage in the country.

Of nine people that were reported missing after entering the underground parking lot of their apartment building in Pohang, seven were pronounced dead after their bodies were recovered, while two survived.

A woman in her 70s, also in Pohang, died after being swept away by torrential waters and another woman in her 80s was found dead after her house was buried in a mudslide in Gyeongju.

More than five-thousand-240 people nationwide evacuated, over six-hundred of whom still remain displaced. Some 12-thousand houses and stores were inundated and over seven-thousand hectares of farmland across the country were submerged and damaged, mostly in North Gyeongsang Province.

The president on Wednesday designated Pohang and the neighboring city of Gyeongju as special disaster zones, opening the door to state funds that cover a significant portion of recovery costs.

The presidential office said Yoon made the decision after visiting the cities hit hardest by the typhoon.

President Yoon expedited the designation in light of the massive damage to the cities, inconveniences for local residents and the preliminary assessment of the damage.

The top office said that further designations may also be declared quickly for additional areas if the requirements are met.

In a visit to Pohang on Wednesday afternoon, Yoon said that he would do his best to provide swift assistance for the local residents suffering in the wake of the storm, pledging to declare the city a special disaster zone upon returning to Seoul.

The designation enables the affected regions to tap into state funds to cover a significant portion of recovery costs.