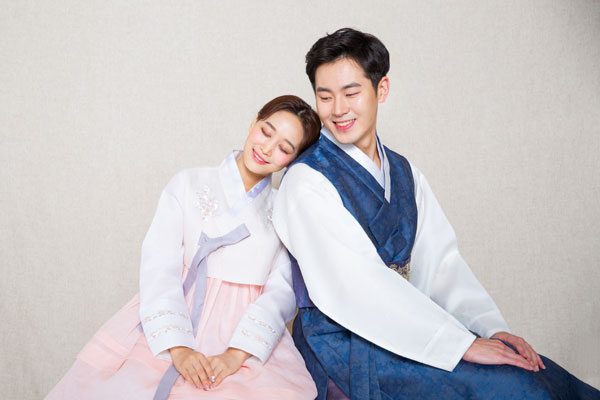 On the back of the global boom of Korean pop culture, hanbok enjoys great popularity around the world. The Oxford Learners’ Dictionaries have recently included the Korean word “hanbok,” which is defined as a traditional Korean costume consisting of a jacket with long sleeves and a long, wide skirt for women and loose trousers for men.

Now, hanbok is not just an item of clothing but has become part of cultural content representing Korea. In North Korea, the traditional attire is called joseon-ot or Joseon clothes. It refers to clothes worn by people during the Joseon Kingdom—the last dynasty of Korea.

Today, we’ll learn about hanbok in North Korea from Professor Jeon Young-seon from the Institute for the Humanities and Unification at Konkuk University.

Hanbok is attracting attention from people in various parts of the world, thanks to Korean TV series and K-pop stars.

A video of K-pop superband BTS performing its hit song “IDOL” in front of Geunjeongjeon Hall of Gyeongbok Palace in Seoul was shown on NBC’s “The Tonight Show Starring Jimmy Fallon” in 2020. At the time, viewers paid keen attention to the hanbok-inspired outfits worn by the seven-member boy band. Other K-pop groups that have a solid fan base overseas, such as BLACKPINK and Stray Kids, have also used modern hanbok as their stage costumes to catch the eyes of audiences worldwide.

A North Korean art troupe visited South Korea in February 2018 on the occasion of the PyeongChang Winter Olympics. At the time, members of the troupe, clad in beautiful hanbok featuring pink skirts, sang the song “Nice to Meet You.”

But the traditional Korean attire worn by South Korean singers is slightly different from that of North Korean performers.

The cultural difference between South and North Korea is also found in hanbok. Hanbok worn by North Korean troupe members approaches closer to the traditional, authentic style, while South Korean hanbok has been somewhat modified, often used as a modern stage costume.

In South Korea, hanbok has established itself as a new fashion item. Not only celebrities but general citizens post snaps of themselves wearing hanbok on social media. It is common to see foreign tourists visit ancient palaces in Seoul, dressed in hanbok. There are hanbok-rental shops near the royal palaces. Before the Lunar New Year holiday, many South Koreans are probably preparing the traditional outfit.

In North Korea, too, many residents are said to be looking for hanbok ahead of traditional holidays.

North Korean broadcasts show that most spectators attending Lunar New Year concerts are dressed in hanbok and many locals wear it when participating in special events. Newscasters would wear the traditional clothes in the past, although the trend has changed these days.

North Korea’s most famous news presenter Ri Chun-hee, who is familiar even to South Koreans, typically sported hanbok. Foreign media nicknamed her “the pink lady” for the bright pink color of the hanbok jacket she put on when delivering news reports. During the inter-Korean summit in 2018, South Korean performers visited Okryugwan, a famous restaurant in Pyongyang. At the time, employees working at the restaurant were also dressed in hanbok.

While South Koreans wear hanbok on traditional holidays or special occasions, North Korean people seem to wear it in their daily lives frequently.

In general, people around the world wear their traditional attire on special occasions. In North Korea, locals wear hanbok and dance cheerfully on Lunar New Year’s Day and the birthdays of former leaders. Female university students wear a white hanbok jacket and a black skirt as their uniform. Chorus members are often dressed like that when staging performances.

In North Korea, the Grand Dictionary of Korean defines hanbok or joseon-ot as national clothes unique to the Korean race. North Korean media often bring to light the excellence of hanbok.

According to media, joseon-ot is a beautiful and elegant garment and holds a special place in great cultural traditions created by Korean ancestors. The media note that the graceful and diverse jacket and skirt of joseon-ot look great and are easy to wear, stressing that the traditional clothes serve as a symbol representing the nation.

North Korea has advocated the slogan “our state first” in recent years. In this era of “our state first,” people are required to directly express their love for their country. North Korea believes joseon-ot is one of the greatest cultural assets, and it encourages the people to wear the traditional costume often in order to show patriotism and reveal the authentic Korean identity.

North Korea recommends the public, at the state level, to wear hanbok, with local media reporting famous hanbok stores. North Korea began to actively promote the spread of hanbok around 1990.

North Korea’s costume policy is focused on how to combine national culture and socialist culture. Until the 1970s, women were encouraged to wear short skirts, which were considered comfortable clothes for activities and could also save fabric. Beginning in the 1980, the state recommended clothes that could create a bright mood. In the late 1980s, when the “Korean nation first” principle appeared, North Korea stressed something authentically Korean. Joseon-ot was one of them. During the years of former leader Kim Jong-il, the country promoted the policy of developing designs, including the design of the traditional outfit. It encouraged the people to wear joseon-ot and set up many stores specializing in the clothing.

North Korea established the Joseon-ot Association, which hosts an exhibition on the traditional clothing every year since 2003. Attended by various hanbok-related groups, the exhibition consists of a display of the traditional clothes, of course, lectures, teaching hanbok-making skills, debates, contests and the presentation of prizes. Apparently, it also has the purpose of fostering the hanbok industry.

Since 2012, right after current leader Kim Jong-un came to power, North Korea has designated items of non-material cultural heritage, including the tradition of joseon-ot.

While inheriting his predecessor’s policy of promoting the traditional clothes, current leader Kim Jong-un is believed to have reorganized the tradition of joseon-ot in a different way.

North Korea held an exhibition of traditional garments in 2013. For the exhibition, it is said the country, based on historical research, produced and displayed some 100 pieces of clothing from the ancient Korean kingdom of Goguryeo to the Joseon Dynasty. At a similar exhibition the following year, men’s clothes were displayed for the first time ever, alongside women’s, to attract special attention from the visitors.

Previously, North Korea did not include men’s hanbok, traditional clothes worn by the noble class and the royal family, and fancy accessories in any exhibition. Since Kim Jong-un took power, however, those items have appeared in exhibitions and publications. Analysts say that the scope of hanbok has expanded under the current leader’s rule.

In South Korea, many people think traditional culture refers to culture from the Joseon era. But North Korea believes its history and culture are rooted in ancient kingdoms such as Gojoseon(고조선), Goguryeo(고구려) and Goryeo(고려), with special emphasis placed on Goguryeo, in particular. For example, North Korea restored old buildings in the architectural form of Goguryeo structures.

The traditional clothes shown in mural paintings from Goguryeo tombs look different from those of the Joseon Dynasty. But traditional clothing from the Joseon era comprises the basis of North Korean hanbok, as the name “joseon-ot” indicates. For this part, North Korea explains that many of Goguryeo traditions were completed during the Joseon Kingdom and that’s why it accepted Joseon culture. For North Korea’s first display of men’s hanbok, the country adopted the image of Admiral Yi Sun-shin(이순신), the great historical figure from Joseon. That means North Korea modified its negative historical view of Joseon. The North seems to believe traditional culture was completed during the Joseon era.

In the current Kim Jong-un era, the policy of stressing national culture has the purpose of developing the cultural industry by using traditional culture. The emphasis on hanbok has to do with commercializing and industrializing the traditional clothes. It is said North Korea is pushing for various policies aimed at modernizing hanbok and nurturing expertise in hanbok production.

Under the rule of Kim Jong-un, North Korea people wear hanbok more often and the country produces it as an export item. The North will likely maintain this policy. Around 2017, North Korea declared the era of “our state first,” in which the supreme leader carries out the policy of caring for people, who, in return, should display patriotism. The North uses its costume policy as part of efforts to strengthen internal unity. It will likely continue with the policy for some time.

It seems wearing hanbok in North Korea is not simply a matter individual choice but is more about an obligation to protect national culture and fend off any influence from outside culture.