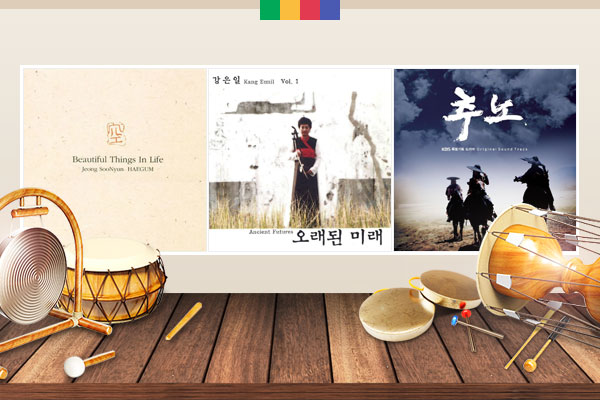 The weather has definitely gotten chillier, prompting us to seek food and drinks that are warm and comforting. The same goes for music. We want music that can cheer us up and energize us and the haegeum(해금) fits the bill. People have become familiar with this fiddle-like instrument nowadays, but it was not a well-known instrument as recently as twenty years ago. In fact, it wasn’t welcomed in performances, because it sounded more like a wind instrument than a string one. In the old days, it was regarded as neither a string instrument nor a wind instrument, a rather unfavorable perception that robbed it of a place in an orchestra. But nowadays the haegeum(해금) plays the role of bridging the string and woodwind sections in traditional orchestras. The biggest merit of the haegeum(해금) is its portability and versatility. Being small and lightweight, it can be carried anywhere and can make a wide range of sounds. The person who played the most crucial role in promoting this instrument is the haegeum(해금) virtuoso Jeong Soo-nyun(정수년). Here’s one of her better-known pieces, “Beautiful Things in Life.”

Jeong currently teaches students at the School of Korean Traditional Arts of the Korea National University of Arts. She started studying the haegeum(해금) in middle school. It didn’t take long for the gifted student to take first place in a citywide competition. There is an interesting anecdote about how Jung started as a haegeum(해금) player.

When the time came for the students to choose an instrument they wanted to major in, her classmates rushed to choose the popular gayageum(가야금) and geomungo(거문고), while the introverted Jeong was left with no other option but to choose the haegeum(해금), the only instrument that was remaining. The reason she took first place in the competition was because there weren’t many haegeum(해금) entrants. Nonetheless, she was encouraged by her performance at the competition and dreamed of becoming a renowned haegeum(해금) player from then on. While playing in the KBS Traditional Orchestra in the mid-1980s, she joined the gugak(구각) chamber orchestra Seulgidung(슬기둥) and went on to promote the instrument to a wider audience. Her album “Gong(공)” meaning emptiness, released in the early 2000s, was instrumental in popularizing the haegeum(해금). To be frank, the traditional haegeum(해금) sound was too nasal and sharp to appeal to the masses. But Jeong worked on the shortcomings and created sounds that were softer and more touching. Around the same time, there was another musician that worked to create a haegeum(해금) boom. It was Kang Eun-il(강은일), otherwise known as the haegeum(해금) diva. Here’s Kang playing “Hey, Ya!”

That was Kang Eun-il(강은일) playing “Hey, Ya!” adapted from the Gyeongsang-do(경상도) folk song “Ongheya(옹헤야).” Kang, now a professor at Dankook(단국) University, devotes most of her time to teaching students, but she used to travel around the globe to promote this string instrument. She played the piano and violin when she was young, which helped her master the haegeum(해금) so quickly. After her father died in a car accident when she was just a middle school student, she was able to comfort herself and overcome his death by playing the haegeum(해금). She was also mentored by unique and eminent musicians such as Kim Yong-bae(김용배), a founding member of Korea’s first samulnori (사물놀이) band, master percussionist Kim Dae-hwan(김대환), and the renowned saxophone player Kang Tae-hwan(강태환). Their tutelage helped her explore and shape her own world of music. Following Professor Kang’s footsteps and enlarging the haegeum(해금) fan base nowadays is Kkotbyeol(꽃별). She took part in pansori(판소리) singer Kim Yong-woo’s(김용우) concert in Japan when she was only a sophomore in college. That was when she was discovered by a music producer and released her first album in Japan. She is touted today as a young haegeum(해금) musician who best appeals to the sentiments of the younger generation.

Here’s Kkotbyeol(꽃별) playing “Lovers” from the original soundtrack of the TV drama “Chuno(추노)” or “Slave Hunters.”