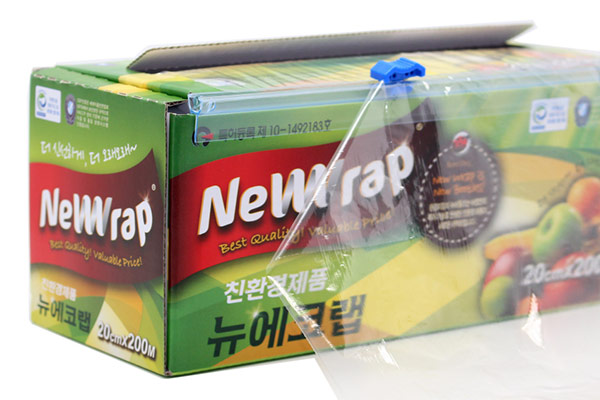 For the first time in the industry, New Wrap acquired three certifications including the carbon emission certificate and SQF 2000, which is one of the six standards approved by the Global Food Safety Association. SQF stands for safety quality food. It is a food quality control certification based on Hazard Analysis and Critical Control Points or HACCP management standards. And lastly, the company became the first manufacturer of eco-friendly wrap products.

As a provider of kitchen goods, New Wrap has many “first” titles under its belt. It obtained the carbon label mark certification in 2011 for the first time in the industry. It became the first food packaging material maker to earn the SQF certification in 2013. It also acquired environmental mark certifications, EL727 and EL606, in 2014 and 2015 respectively, to distinguish itself in the industry. In fact, the company was sure of success from its beginning.

Large discount store chains developed rapidly in South Korea in the early 2000s, posting double-digit growth rates. At the time, many small manufacturers supplied their goods to traditional markets or wholesalers. This is because they didn’t know how the distribution industry worked. But I thought the quality products made by small firms could enter discount chains after an upgrade in their designs and packaging. The stores, for their part, also needed such products. I was confident that this business would turn out well.

Before establishing his company, Lee was in charge of sales at a food packaging material firm for about ten years. In South Korea, large discount stores began to appear in the 1990s and brought about a radical change in the distribution industry in the early 2000s, giving rise to demand for private-brand or PB products. Lee was able to read this new trend. Having discovered that there weren’t enough manufacturers to fill the rising demand, he decided to start his own business.

At the time, plastic wraps came in only two sizes—20 centimeters and 30 centimeters. But his company offered a new size of 25 centimeters to explore the blue ocean. New Wrap’s fresh challenge drew a positive response from discount chains. It was offered space at a major supermarket chain, just a year after its establishment. The company achieved success and quickly achieved stability.

But Lee refused to settle. He thought that the intense competition among discount chains would cause suppliers to engage in a price war fiercer that before. So he invested the profits he had earned in the machinery to increase productivity. Currently, the company produces over 100 kinds of food packaging material, the greatest range of variety in South Korea. Among them, the company’s signature product is the New Sliding Cutter Wrap.

Conventional plastic wraps may not roll out well and users often hurt their hands due to the metal blades. The wraps may not be cut easily, and they are less adhesive.

The patented New Sliding Cutter Wrap resolved all these shortcomings. The support fixture installed inside the case allows the wrap to easily unroll. Also, the plastic sliding cutter, not metal blades, is attached to the wrap for softer and safer cutting. And it clings well to the surfaces of various materials. This product has been well received in the market.

When making new products, the company places top priority on consumers’ opinions. It carefully listened to the users of previous food wraps and took their complaints into consideration. For its new product, it added the plastic sliding cutter to the wrap case so users won’t be hurt by metal blades. Also, anti-rewind coating on the top of the case prevents the wrap film from rolling back into the case. The company continued to make efforts to ease the inconvenience of consumers. 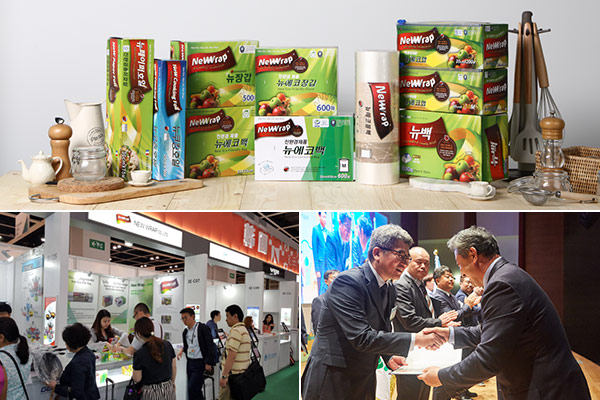 I happened to notice rolled and perforated toilet paper at a restroom and wondered if plastic wraps could be produced that way, making it easy to tear one sheet off. Why not? What mattered was how much it would cost. Wraps are a disposable product. Even a 10-percent rise in their prices will discourage consumers from purchasing them, no matter how brilliant the idea is. It was possible to produce wraps that can be cut piece-by-piece.

But profits would be only 60 percent of those of previous models and often flaws were found. I decided to reduce the size of the wrapping paper tube by 30 percent. In fact, the size had remained the same in South Korea for 30 years. A smaller tube means a smaller wrap case and a smaller outer box, which contributed to saving logistics costs. So we could release the new product without raising the price.

It took some time for the company to develop the new cling wrap and it experienced failure repeatedly in the process. However, it never gave up on the development. Finally, it was able to make a food wrap that can be torn along the perforated line. The convenient wrap was selected as one of “Seoul Award Idea Products.” The company is spurring efforts to develop environmentally-friendly products as well.

The use of disposable products may not be helpful for protecting the environment. So, more and more consumers in advanced countries are looking for eco-friendly products. We should pursue green products to move towards the next stage. So our slogan “New Life, New Wrap” has been upgraded to “New Eco, New Life, New Wrap.”

For us, it’s absolutely important to deal with consumer complaints properly. By making complaint-free products, we believe we can be a hidden champion in the industry. We hope New Wrap’s products will be indispensable in kitchens all across the world, just like salt.

New Wrap is challenging the conventional idea that disposable food packaging material is the main culprit of environmental pollution. It has begun to use plants such as corn and sugarcane for its products and is in the process of making green products that will decompose naturally 18 months after being disposed.

New Wrap draws special attention from overseas as well, as it was selected as “Test marketing” in a South Korean supermarket chain in China in 2012. Without a doubt, the company is making kitchens around the world healthier and more convenient.