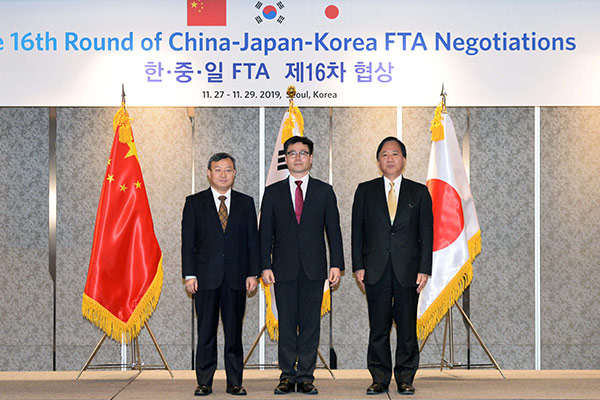 South Korea, China and Japan held a new round of talks on their proposed free trade agreement or FTA, taking a step closer to a win-win deal aimed at expanding trade and investment among the three Asian countries. Here is Professor Kim Gwang-seok from Hanyang University’s Graduate School of International Studies to give his take on the recent trade negotiations.

South Korea, China and Japan held the 16th round of FTA negotiations in Seoul for three days starting on November 27th, seven months after the previous round of talks in Tokyo. There were concerns about the talks because relations between South Korea and Japan have rapidly deteriorated in recent months. Fortunately, the latest negotiations are believed to have made some progress.

The talks came after the ten-member Association of Southeast Asian Nations or ASEAN and their dialogue partners effectively reached a deal known as the Regional Comprehensive Economic Partnership or RCEP early last month.

In the process of forming the mega Asia-Pacific trade pact that includes South Korea, China and Japan, the three Northeast Asian countries pushed for their own trade deal to open up their goods and services markets and to promote three-way cooperation in the areas of investment, rules of origin, customs facilitation and e-commerce.

The recent FTA talks are expected to accelerate discussions about the trilateral economic integration of South Korea, China and Japan. Before the meeting last week, South Korea pointed out that global free trade faced a crisis and called for a high-level trilateral FTA. Echoing this view, China underlined the significance of the trade talks, which took place before the trilateral summit taking place later this month. Japan also noted that the world economy was at a crossroads and agreed that details of the three-way FTA should go beyond those of RCEP. The three countries’ concerted calls for further market liberalization are reminiscent of what they aimed for at their first FTA talks.

Around the time when Seoul, Beijing and Tokyo launched FTA negotiations in 2012, the three countries accounted for 21.5 percent of the world’s population, 20.5 percent of global gross domestic product or GDP and 17.5 percent of global trade. This shows that an FTA between the three Northeast Asian economies, if concluded, will form a huge trade bloc. Research institutes predicted that opening up various industries, including manufacturing and agriculture, would generate economic effects of up to 16.3 billion US dollars in the first ten years after the trilateral agreement goes into effect. Apart from the economic benefits, the three countries share common interests in foreign affairs and security.

Unfortunately, the trade negotiations have made little headway for the last six years after the first round of talks officially kicked off in Seoul in 2013, due to the difficulty in narrowing differences over thorny issues.

But apparently, the three nations expressed their commitment to speeding up the negotiation process during the talks last week, which I think is greatly significant.

China has grown rapidly to become one of the G2 countries along with the U.S., while Japan has produced as many as 16 Nobel Prize winners in physics and chemistry and boasts a strong competitive edge in high-tech materials. South Korea came in 12th in the global GDP rankings in 2018. Cross-border cooperation between these three countries will certainly lead to substantial progress not only in their economic relations but in the areas of the alliance, diplomacy and security.

Despite their common goals, however, the three nations have yet to produce any meaningful results in their six-year trade talks.

It is quite challenging to devise measures that will satisfy all the three countries due to differences in their industrial structures. It is little wonder that the negotiations are taking a considerable amount of time.

Korea, for example, is reluctant to open its agricultural market to China, as the massive inflow of low-priced Chinese farm products will deal a blow to the local agricultural industry. Both Korea and Japan are strong players in automobiles, shipbuilding and steelmaking. If they open these markets to each other, competitive manufacturers will have more opportunities to expand their businesses. But market openings will have a negative impact on those who are not competitive enough. It is not easy for the three countries to reach a consensus as they all have different sensitive items.

Differences in the three countries’ economic and trade structures are the biggest stumbling block in the way of their FTA negotiations. South Korea and China are hesitant about opening their markets to manufacturing, in which Japan stays highly competitive. South Korea and Japan, meanwhile, are concerned about the influx of Chinese agricultural and fisheries products that have an edge in price competitiveness. In the service area, Korea and Japan are advocating for a high level of liberalization, while China is calling for a phased market opening. In other words, the three nations have their own complex calculations about sensitive industries. No bilateral free trade deal has been inked between South Korea and Japan, or between Japan and China, although South Korea and China did manage to sign a bilateral FTA.

However, there is some good news since the recent trade talks between the three countries took place thanks to the momentum created from the RCEP deal in early November.

The ten ASEAN member states and five other countries including South Korea, China, Japan, Australia and New Zealand clinched a deal on the major points of RCEP on November 4th. If India agrees to join the deal, the mega trade pact involving 16 nations will be finalized. Compared to the large-scale deal, in which economic cooperation might be rather loose, a smaller South Korea-China-Japan FTA within the framework of RCEP could be managed more tightly and effectively.

The final conclusion of RCEP and its effectuation will bring together South Korea, China and Japan in one free trade zone. They will then seek a win-win FTA agreement to promote economic cooperation and common prosperity. In this respect, the RCEP deal is the crucial foundation for a future regional trade bloc consisting of Korea, China and Japan.

Of course, the three nations will have to hold lengthy discussions even after last week’s negotiations. In the process, South Korea needs to overhaul its industries, while seeking ways to grow together with its neighbors.

In the course of forging a large, regional FTA and pushing for its New Southern Policy designed to strengthen ties with Southeast Asian nations, South Korea needs to review its own industries. Conclusions of multilateral FTAs will provide a great opportunity to some industries but may also lead to restructuring in other fields that are less competitive, including farming. In other words, FTAs have both positive and negative effects. For Korea, it is necessary to re-arrange industrial systems in a way to share the benefits from market opening with vulnerable sectors and reduce the negative impact on the local economy without any major conflicts.

An FTA is a double-edged sword. For Korea, opening its market to neighboring economic powers will be an opportunity and a threat. It should formulate appropriate measures to maximize benefits and minimize damage from the trilateral FTA.