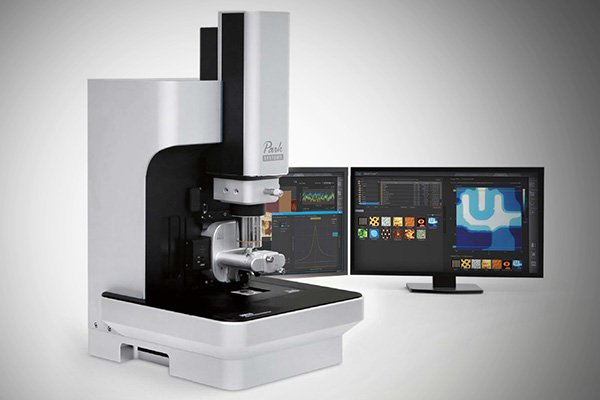 The “Nano Korea 2019” exhibition was held at KINTEX, northwest of Seoul, from July 3rd to 5th. Having established itself as one of the world’s three major nanotechnology events, Nano Korea features the latest technologies and products of the nano-convergence industry. At this year’s fair, 436 companies from 12 different countries showcased research outcomes of nanotechnology and various applied products.

Prizes were awarded to Korean firms that have contributed to the development of the domestic nano industry. From this week, we’ll introduce those promising companies that received the “Nano Korea Award” for their advanced technology. To begin, we’ll meet with a representative from Park Systems, which won the Prime Minister’s Award, the highest prize of the Nano Korea Award. Let’s hear from Cho Sang-joon, managing director in charge of R&D at the company.

The atomic force microscope or AFM is an important tool for nanotechnology, but the device has been used in the industry only in a limited way due to its shortcomings. Fortunately, Park Systems has been able to develop innovative metrology equipment for the semiconductor industry as it carried out a state-run project over the last three years. By developing a fully automatic industrial in-line AFM solution, the company received a high score of 97 points for the state project. At present, Korea imports over 90 percent of its high-tech metrology equipment. That’s why Park System’s success story means a lot and I think that’s why the company received such an honorable award at Nano Korea 2019.

Park Systems shined at this year’s Nano Korea with its three-dimensional atomic force microscope capable of measuring nano devices with thickness less than 30 nanometers. The 3D AFM is used for semiconductor manufacturing.

Armed with world-class technology, Park Systems is the only AFM manufacturer in Korea. It was founded in 1997 and was listed on the tech-heavy KOSDAQ in 2015.

The atomic force microscope was invented in 1985 by professors at Stanford University. At the time, Park Systems’ CEO, Park Sang-il, joined the development process as a PhD student. After graduating in 1988, he founded a firm called PSIA in Silicon Valley to introduce the world’s first commercially available AFM and establish his own brand in nanotechnology. He sold the firm in 1997 and created his second company, Park Systems, in Korea, with a goal of developing AFMs for industrial purposes.

Company CEO Park Sang-il was a student of Calvin F. Quate, who won the prestigious Kavli Prize in 2016 for developing the atomic force microscope. Park graduated second from Seoul National University with a degree in physics and earned a doctorate in physics from Stanford University, one of the world’s top universities. After graduation, rather than becoming a professor, he chose to start his own business. Based on the experience in the development of the first commercial AFM, Park has been committed to advancing AFM technology further since he founded this company, Park Systems.

It’s been only 30 years since the invention of the AFM, compared to the electron microscope with its long 90 year history. The AFM is still in the early stages of development, so it still has great growth potential. Designed to enable people to view some of the tiniest things in the world, the AFM is mostly used in high-tech areas. But the device has not been used widely due to a few drawbacks. To overcome those limitations, we focused on the development of an automated, easy-to-use AFM capable of providing highly accurate and reliable data. I’d say that we successfully developed an AFM to be actually utilized in various industries.

Literally speaking, an atomic force microscope allows people to see things at the atomic level. Unlike general microscopes, the AFM does not use lenses but has a cantilever with a sharp tip or probe at its end. Consisting of two or three atoms, the probe functions like an antenna. The cantilever oscillates just above the surface of the sample and scans the arrangement structure of atoms on the surface. The atoms on the probe and on the surface push and pull each other, and the device measures a change in the force in the process. Some AFMs can measure surface textures of 0.1 nanometers, the diameter of a single atom. To put it differently, it’s like spotting a golf ball on the earth, from outer space.

But the AFM has some weak points as well. It is hard for the highly sensitive device to ensure reliability. To remedy the problem, Park Systems applied three ideas to its product. First, it adopted the so-called non-contact mode to preserve the sharpness of the tip of the cantilever. Second, the Z-scanner, which moves the tip, is decoupled from the XY scanner to offer perfectly flat scanning. Also, the company’s user-friendly operating software enables people, including beginners, to easily use the AFM with a few simple clicks of a mouse in auto mode.  With 32 patents it has obtained both from Korea and abroad, the company possesses unrivaled technological prowess.

To make AFMs available for wider use in the industry, we have to ensure they don’t damage samples. It is hard for the industry to accept destructive sample scans, which may alter relevant data. It is generally believed that AFMs can destroy samples because they use a cantilever with a sharp tip. But even electron microscopes can damage a sample.

In a major breakthrough, our company successfully developed the non-contact measurement method for non-destructive sample scans. Of course, it requires a high degree of accuracy. Thanks to this amazing technology, our AFMs can ensure ultra-high resolution and accuracy without damaging samples. This is our biggest advantage. We have set ourselves apart from our competitors by constantly developing technology, improving equipment and providing high-quality customer services.

Even world-famous metrology equipment makers including Bruker, a leading industrial AFM manufacturer, haven’t been able to develop the outstanding technology implemented by Park Systems. It is the only company in the world to commercialize automation software for AFMs, called Smart Scan. It comes as little surprise that the company’s products are used by state agencies, university labs and major companies worldwide.

Our products are used by prestigious universities and research institutes such as Harvard, Berkeley, Stanford, the National Aeronautics and Space Administration, more commonly known as NASA, and the International Research & Development and Innovation Hub. More than 90 percent of semiconductor manufacturers use our products, which are also embraced by various other businesses including Rolex, Coca-Cola, steelmakers and hospitals. And many more industries are expected to follow suit.

AFM technology is still evolving. We were fortunate enough to get off to a good start in this field. With our success story, we’ll continue to grow and become a leading provider of excellent nanotechnology measurement systems to be used by people the world over.

In terms of size, the AFM market is one-tenth that of the electron microscope market. But the former is one of the fastest growing markets, on the back of growing demand for high-capacity hard disks and memory chips. With its unique technology, Park Systems is demonstrating the superiority of Korean AFMs in this promising market. Thanks to this company, Korea is emerging as an AFM powerhouse.