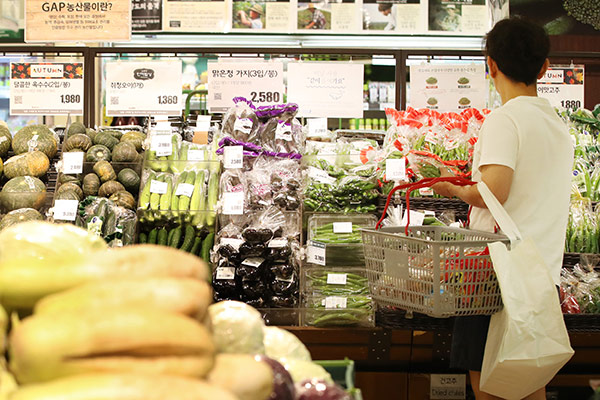 The record-low consumer price level is stoking concerns over deflation in Korea, although the government argues that the recent negative inflation will be only short-lived. We cannot help but wonder whether falling consumer prices are really a sign of deflation or just a temporary phenomenon. Here’s economic commentator Chung Chul-jin with more.

In one of the most disturbing piece of economic news in recent weeks, Korea’s consumer prices fell 0.4 percent in September from a year earlier, marking the first on-year decline in inflation since Statistics Korea began to compile relevant data in 1965. The consumer price growth rate had remained below 1 percent for eight consecutive months since January before recording its first negative growth last month, heightening fears of deflation.

By region, Ulsan saw its inflation decrease by 1 percent, the sharpest drop among 16 major cities and provinces. Housing prices have also been falling in the southeastern port city, partly due to industrial structuring in the shipbuilding and automobile sectors.

The situation is not much different in other local regions such as South and North Gyeongsang Provinces and South Chungcheong Province, while analysts have mixed views about the possibility of deflation in the Seoul metropolitan area.

Last month, Korea experienced negative inflation for the first time ever. The consumer price growth rate in August was minus 0.038 percent but was officially recorded as zero since the inflation index is rounded off to the nearest tenth of a percent. That means consumer prices have stayed in the zero range throughout the year before officially posting negative growth in September. The situation in local provinces seems even more serious. For instance, Ulsan has seen negative inflation for eight months in a row, while the housing market there remains bearish.

Many are concerned that the Korean economy is sliding into an initial phase of deflation.

When I was little, I simply thought that deflation was better than inflation because I could eat more cookies because of a fall in prices. But in reality, deflation could be more fatal to an economy. If you expect prices to keep falling, you won’t spend money to buy something right now because you can get the same item at cheaper prices three to six months later. If people choose to store cash and not spend it, consumption will be reduced and manufacturers will see stockpiles mount. Companies will then refrain from investment and it will negatively influence household income as well as the financial sector. The government, for its part, will find it difficult to carry out its fiscal policy as it collects fewer taxes. As a result, the economy will be trapped in this painful cycle.

Deflation, which refers to sluggish consumption despite a sustained decline in prices and therefore indicates economic contraction, could be more troublesome than inflation. Japan also went through a dreadful period of deflation.

The Japanese economy began to slow down in 1991 when the asset price bubble collapsed. Despite various policies adopted by the government, Japan suffered a long-term recession, with its annual economic growth posting a mere 1.1 percent on average until 2001. In the process, local banks became increasingly insolvent, while companies and households went bankrupt and asset prices decreased. At present, the Korean government has dismissed the possibility of deflation.

The Bank of Korea, the Ministry of Strategy and Finance, and Statistics Korea are all saying that there are no serious signs of deflation. They are citing the so-called “base effect” from last year’s unprecedented heat wave and high prices in oil and agricultural products in August and September. As prices have stabilized this year, they blame the base effect for record-low consumer prices in the same period this year. Pointing out that lower oil and food prices this year dragged down the overall consumer prices, authorities explained that it is still too early to conclude that the economy has entered deflation, based on the low inflation trend in the recent two short months.

The Bank of Korea predicted in its report that consumer prices will rebound around the end of the year. From the first quarter of 1990 to the second quarter of this year, consumer prices in major economies dropped 356 times on a quarterly basis. That means many countries often experienced a fall in consumer prices. But in most cases, the prices rebounded in a short period of time. The projection from Korea’s central bank is based on this fact.

Despite the Korean government’s estimation, however, major institutions both inside and outside the nation are sounding the alarm about the low inflation in Korea.

There are few, if any, financial institutions that are forecasting a rise in consumer prices in Korea.

ING, Barclays and Fitch predict that inflation will hover below 1 percent, while Bloomberg has also lowered its outlook. Notably, they are revising their estimations downward, anticipating a fall in consumer prices and in Korea’s potential growth as well.

On another gloomy note, projection for the inflation rate in the coming year has also slipped to 1.8 percent, falling below the 2-percent threshold. In the current Korean economy, the expected inflation should be estimated at 2.5 percent or higher. On the whole, the consumer price level remains pretty low.

Experts are paying attention to core inflation, which excludes seasonal factors or volatile food and energy prices. Low growth in core inflation is interpreted as weak consumption. Core inflation in Korea has remained in the zero-percent range since March this year, up 0.6 percent last month. This is the lowest since 1999 when core inflation rose 0.3 percent from the previous year.

There are mixed opinions on whether or not the Korean economy has entered deflation. But what matters now is the formulation of measures to forestall deflation.

If inflation still remains low in October in the lower zero-percent level, the authorities should stop arguing and make efforts to tackle the situation right away. First of all, it is necessary to restore consumer confidence, which has much to do with deflation. If consumers decide to sit on their cash and spend less, it will be more difficult to remedy the situation. That’s why the government has maintained its view against deflation.

To encourage consumers to open their wallets, the government needs to adopt more aggressive fiscal and monetary policies. A further interest rate cut might be an option. But a 0.25 percentage point cut in the already low interest rate at the mid-1 percent level will have a limited impact on consumer spending.

The government may increase its subsidies for welfare programs, but it also needs to implement an expansionary fiscal policy more actively by initiating social overhead capital projects promptly to produce the desired effects in the short term.

Nobel Prize-winning economist Paul Krugman said that a prudent policy stance could increase deflation risk and that the danger of a deflation trap seems a lot stronger than the risk of possibly overshooting on inflation.

The Korean government has already made an effort to stave off deflation, but it needs to take a step further and focus more on ways to improve consumer sentiment.