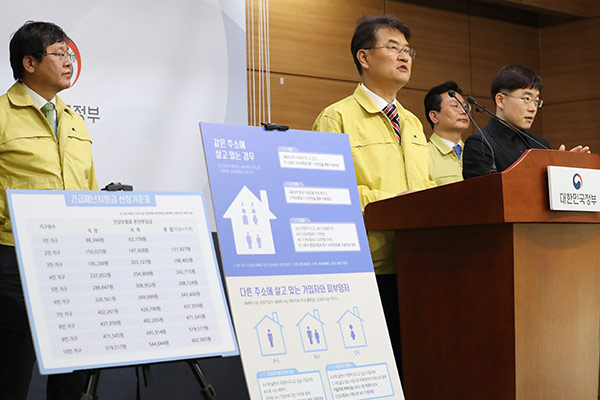 In an unprecedented move, the South Korean government has decided to provide an emergency disaster relief funds to help people weather the economic difficulties caused by the COVID-19 pandemic. Today, we’ll discuss whether the government’s emergency funds will help boost sluggish domestic consumption with Lee In-chul, director of the Real Good Economic Institute.

During a third session of the emergency economic council chaired by President Moon Jae-in last week, the government decided to offer 1 million won, which is about 820 US dollars, to each household with four or more members in the bottom 70-percent income bracket. The payment will be scaled down for households with fewer members. With a one-person household receiving 400-thousand won, a two-person family, 600-thousand won, and a three-person household, 800-thousand won. The money will be provided in the form of local gift certificates or digital currency with an expiration date.

The COVID-19 epidemic has prompted the government to give some form of cash payments directly to the people.

This is the government’s first cash handout ever since its establishment, reflecting that the ongoing crisis is more serious than ever before. The government explains the relief funds have the purposes of supporting public livelihoods, stimulating consumption and consoling people.

Under the government plan announced on March 30, 70 percent of households nationwide or more than 36 million people will be entitled to the aid program worth 9.1 trillion won or 7.4 billion US dollars. It is indeed an extraordinary measure, as South Korea has never before supported people’s living costs financially.

In fact, South Korea is not the only country to grant cash payments to people. Many countries around the world are doing so, as part of efforts to cope with the economic fallout from the virus outbreak.

An increasing number of countries are providing financial aid to their people to ease the economic impact of the COVID-19 crisis, with most proactive country being the United States.  U.S. President Donald Trump has signed a massive 2.2 trillion-dollar stimulus package to provide financial support to individuals and businesses. Under the rescue plan, each adult will be given 1,200 dollars. In addition, Trump has called for another 2 trillion dollars for spending on the country’s infrastructure. If this bill is passed, the U.S. will pour about 4.3 trillion dollars to overcome the crisis. The amount is almost equal to the annual federal budget of 4.82 trillion dollars.

Already in February, the Hong Kong government promised to give every permanent resident over the age of 18 a cash payment of 10-thousand Hong Kong dollars. On March 12, the government in Australia also unveiled a plan to provide 750 Australian dollars to each low-income earner. In the U.S., 90 percent of the entire population, with the exception of high-income earners, will be provided with relief funds. Japan plans to announce emergency economic measures, including cash payout, within this month.

Those special measures, of course, are aimed at responding effectively to the economic crisis triggered by COVID-19. Countries have imposed travel restrictions in fear of the spread of the highly contagious disease. An economic contraction has negatively affected global financial markets, where volatility has expanded in an unprecedented way.

The global outbreak of the virus is taking an especially heavy toll on the South Korean economy, which greatly relies on trade. Tourism, airline and shipping industries have suffered a direct hit. Meanwhile automobile, display and smartphone makers have experienced disruptions in production and supplies, due to a series of factory shutdowns. As the virus spreads, nine out of ten self-employed businesses have seen their sales decrease, and one out of three such stores are closed temporarily due to a dwindling number of customers.

So, will the South Korean government’s cash relief contribute to tiding over the COVID-19 crisis?

The emergency aid worth 9.1 trillion won is 0.5 percent of Korea’s nominal GDP of 1,913 trillion won last year. Finance Minister Hong Nam-ki explains that gift certificates will induce people to consume them and therefore push up domestic spending. The government expects that financial support for low-income families will be more effective in helping stimulate consumption. The government’s first supplementary budget calls for giving consumption coupons to low-income households and easing their burden in paying social insurance fees. They are also eligible for the latest disaster aid money, so the effect of boosting spending will be greater. Typically, an extra budget of around 10 trillion won is estimated to add 0.2 percentage points to economic growth. In the worst outlook, the virus outbreak may lead to South Korea’s negative growth this year. In this situation, the emergency relief funds will have a considerable effect on economic stimulus.

The monetary aid is expected to help ease the financial difficulties of low-income families, self-employed people and small businesses that have been hit hard by the spread of COVID-19. The aid money spent by people will benefit the self-employed and small shop owners first, and then flow to large companies to create a virtuous economic circle. However, there are concerns over fiscal soundness.

The key is how to secure the finance needed for the emergency funds. The central government and local governments will shoulder the burden in an 8 to 2 ratio. The central government says it will save this year’s budget to cover part of the aid package. But that’s not enough. It will inevitably have to issue bonds. The government has already decided to sell more than 10 trillion won worth of state bonds to cover the first 11.7-trillion-won supplementary budget. The deficit-covering bonds are considered national debt, and South Korea’s debt ratio against GDP is feared to exceed 40 percent. After all, government debt should be paid by our tax money or our children’s.

The government will draw up a second supplementary budget bill to finance the aid program. President Moon says the government will quickly submit the bill and have it approved by the National Assembly right after the April 15 general elections. As a result, however, South Korea’s national debt will rise to 820 trillion won, or about 670 billion US dollars, this year.

Even so, many analysts say that South Korea should focus more on crisis management than on fiscal health.

The entire world has shifted to an emergency mode to tackle the crisis that it has never experienced before. Emergency funds should be executed in a timely manner. This is a matter of life and death.

Many agree that the government should quickly implement its financial plan and carry out preventative measures to get control of the situation. The aid money will actually be given to people in May at the earliest. Amid the prolonged COVID-19 pandemic, when the outbreak will end is anybody’s guess. It is also uncertain if this one-off stimulus program will be enough to ease the financial burden of households. The dark night of COVID-19 may not end anytime soon. With this possibility in mind, the government needs to formulate Plan B and C.

President Moon said that no one can predict how deep the scars from COVID-19 on the global economy will be and how long they will last. The government should focus on executing relief funds in a timely and appropriate manner and come up with additional measures, if necessary.