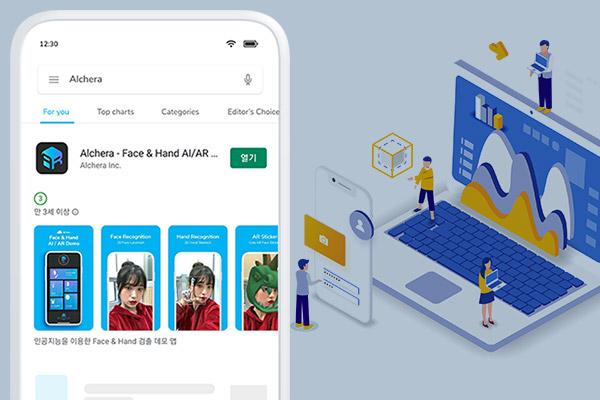 Today, we’re going to introduce you to Alchera, a startup that develops facial recognition technology based on artificial intelligence or AI. Let’s hear from company president Kim Jung-bae(김정배).

Alchera specializes in AI-based image recognition. Even those who haven’t heard of us may have experienced our tech through a popular photo-editing app called SNOW. This photo filter app enables users to take selfie photos with funny virtual stickers featuring glasses or cat ears. This is possible because the phone camera can find the position of the eyes, nose and mouth in real-time. And that’s what Alchera’s 3D facial analysis technology is for. We also have tech to detect unusual events, such as fires, by analyzing images based on AI deep learning. We’ve focused on this particular field for four to five years.

The term “facial recognition” may remind many people of some scenes from spy movies or sci-fi flicks. In fact, facial recognition has approached us in a friendlier and more interesting way, as seen in the SNOW application that changes faces in photos taken by mobile phones in various interesting ways. Alchera drew attention when its facial analysis technology was applied to the photo editing app. The company has also provided its facial recognition technology to other areas as well, including security and finance.

We aim to apply our facial recognition technology to both private and public sectors. In the public sector, we put a great deal of effort into a new passport recognition solution for the Ministry of Foreign Affairs. For passport renewals, an officer sees the applicant’s face in the previous photo and the one in the current photo. The officer compares the two different photos with the applicant’s face in person before issuing a new passport. This service started in July this year and is offered on a trial basis to South Korean diplomatic offices around the world.

The automated immigration control system at Incheon International Airport was previously based on foreign facial recognition technology. But our technology is better, as it can identify people’s faces while they walk by. At present, it is being tested at the airport. In the private sector, our technology has been applied to a Japanese construction company and a market in the U.S.  We’re very proud of these achievements.

Since August, Alchera has provided the Sejong government complex with its service capable of managing entrance and exit. It also plans to offer its technology to the Ministry of Foreign Affairs so people’s passports can be used for identity verification when they conduct non-face-to-face financial transactions.

On top of facial recognition, Alchera’s technology is used for detecting abnormal situations such as forest fires and unusual signs at facilities of public institutions, including the Korea Electric Power Corporation. It is also used to locate suspected criminals and their vehicles.

The company has unveiled another facial recognition solution linked to the body temperature measurement system, attracting attention again in the COVID-19 situation. The service can identify people’s faces even when they wear a mask, and those with high fever are restricted to entering buildings. This solution has already been exported to Silicon Valley, with inquiries pouring in from overseas. 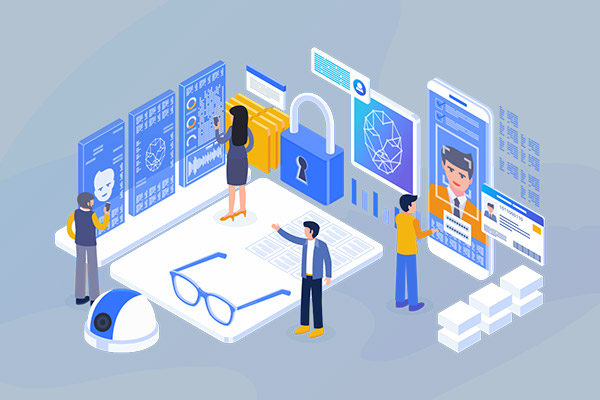 Our strength lies in 3D landmark estimation, which refers to the technology of estimating the position of the eyes, nose and mouth of a person accurately with a margin of error of just 2 millimeters. It is considered incredibly accurate. It can identify whether or not a person frowns, or wears a hat or mask. This tech is applied to the camera app, SNOW.

To use the technology in a reliable and stable way, we collected data about various faces. This includes the faces of men and women of all ages as well as those that are covered. As a result, the technology can identify faces stably in any given environment, regardless of facial expressions, poses or lighting conditions.

Alchera was co-founded by president Kim Jung-bae and vice-president Hwang Young-kyu. Formerly, both men worked on facial recognition technology for more than ten years at the Samsung Advanced Institute of Technology. They set up a new company, Alchera, together, in the hopes that their technology would be used at many more places.

Led by companies in the U.S. and Israel, the global facial recognition market has grown more than 20 percent each year. In Asia, Japanese and Chinese firms dominate the market. But Alchera’s recent performance definitely stands out. Last year, Alchera’s facial recognition technology ranked first among Korean firms in the Face Recognition Vendor Test administered by the National Institute of Standards and Technology in the U.S. It earned higher scores than leading Japanese and Chinese companies.

Data comprises the basics of facial recognition technology, as a massive amount of it can enhance the deep-learning ability of AI. Needless to say, skilled manpower is still vital. Alchera focuses on these two parts in order to secure high technology.

Numerous tech companies have worked on facial recognition and released relevant products for decades. After all, success depends on how accurate facial recognition is. We use two methods to improve accuracy. First, our data team is dedicated solely to securing a massive amount of data for learning. We have a database containing tens of millions of items.

At this very moment, we take photos and collect facial data. This is our great advantage. Second, we have a number of proficient engineers capable of designing AI algorithms. We train young, promising engineers at the company. These are Archera’s strong points.

Alchera’s technology has been recognized by the government and a local business association. President Kim received the Minister of Science and ICT Award in March 2019, while the company was selected as one of the best venture firms by the Korea Venture Business Association in July of the same year.

Having taken root in the domestic market quickly, the company is turning its eyes to overseas markets. It established a corporation in Ho Chi Minh, Vietnam, in 2019 and also opened an office in San Jose, the center of Silicon Valley in the U.S.

Alchera dreams of opening a positive era through AI technology. I’d say a positive AI-based era has three elements: fun, safety and convenience. First, it would be really nice to have more fun through AI. The camera application SNOW is a good example. Second, our tech solution related to a body temperature measurement system is designed to ensure people’s safety. Our tech for detecting and monitoring mountain fires has the same purpose. Third, we’re working hard to provide convenient services, such as an easy walk-through facial recognition for the immigration control system at Incheon International Airport. We hope people the world over will use our technology from morning till night. This is Alchera’s vision.

The word “Alchera” means “dreamtime” in aboriginal Australian language. The company name contains its hope to create a dreamtime through AI. We’re looking forward to the future performance of Alchera, which will open up an era of dreams by enabling AI-powered facial recognition technology to guarantee fun, safety and convenience.