"The Bronze Mirror" by Oh Jung-hee 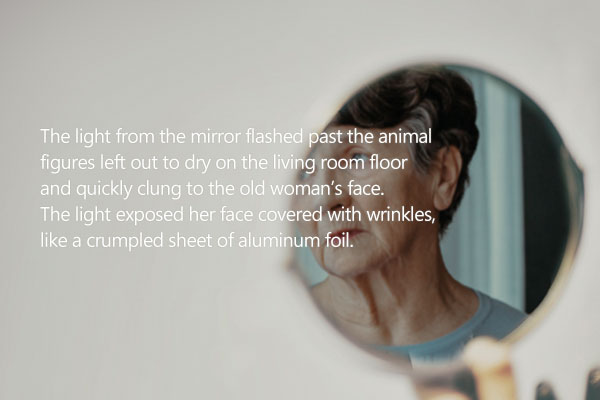 Oh Jung-hee’s “The Bronze Mirror,” published in 1982, received the Dong-in Literary Award in the following year. It’s a story about an elderly couple living with the memory of their only son who died some 20 years earlier. Over the course of a summer afternoon, they talk about death lurking just on the other side of life.

“Put that away. I said put it away. You, naughty girl, I’m going to tell your mother.”

The girl jumped around the yard like a ball and flicked the mirror this way and that. Frightened, the old woman went into the living room. The light from the mirror flashed past the animal figures left out to dry on the living room floor and quickly clung to the old woman’s face. The light exposed her face covered with wrinkles, like a crumpled sheet of aluminum foil.

The old woman nearly pleaded with the girl, but the child giggled like a little devil, perhaps finding the old woman’s sudden fear amusing, and didn’t stop playing with the mirror.

The light reflected off the mirror darted to the ceiling and then to the walls before coming to rest on a glass. Amid the silence that settled together with the fading light outside, only the dentures in the water shone brightly as if wanting to say something.

That last scene is rather meaningful. The child was out in the yard, the world of light, while the old woman came into the room representing the world of darkness. The old woman was afraid of the mirror that the girl was playing with, because the quick, darting light appeared to symbolize the girl’s youthful vitality. The old woman in the dark room is like a dull bronze mirror that lost its sheen from being buried in the ground for so long. The author made the old woman realize where she stood in life through the medium of a child’s mirror.

: Debuted by publishing “The Toyshop Woman” on Joongang Ilbo in 1968