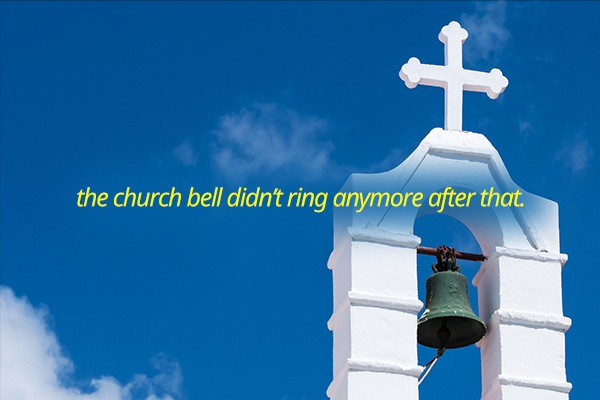 Anna was a bell ringer at a small church in our town.

This story might make someone recall a character from a Victor Hugo novel, the poor Quasimodo who had to be locked up in the bell tower of Notre Dame because of his ugly looks.

But our Anna, like the image from her name, leans more toward Esmeralda, the story’s Gypsy heroine. A cynical beauty, Anna was a 11-year-old girl who likes to ride her red bicycle around the town like a wanderer.

Anna didn’t have a diary. If she poured out all her grief in a diary, she might have to use half the diary just for a day’s entry.

Although she didn’t have the money to buy a diary, her compulsion to write something grew stronger and what she chose instead of a notebook was our town.

Our town was old and shabby but to Anna it was a place with possibilities as rich as a world atlas. The potentials were on the walls of a multiplex apartment, on plastic park benches, on the poles of a chin-up bar at the playground, on the utility poles, at public dumpsters, on steel or glass doors.

Anywhere with a smooth and even surface was enough.

The story’s title, “Anna’s Diary,” is reminiscent of “The Diary of Anne Frank.” Anne Frank was a Jewish teenager who had documented her life under the Nazi regime in a diary. She had recorded both trivial and significant events in her life. She badmouthed grownups, talked about her first period and her first kiss. To Anne Frank, a diary was more than just a secret record but a documentation of her short life to be read by the world after she is gone. Her diary was the only proof of her existence when the lives of her family and herself were constantly threatened. I think it was the same for Anna in this story. She used her diary to publicize her existence to the world and document her life. If she didn’t have this diary, she wouldn’t have been able to relate to the world. In short, Anna’s diary was a bridge between her and other townspeople.

ut there was something that definitely changed. She no longer wrote in her diary. We didn’t know whether she had lost her energy or interest to write or her inability to explore the town kept her from writing. Regardless, we were disappointed.

After a while we decided not to read the entries written inside the bell. We believed it was our last duty to keep them safe.

To be honest, though, nobody attempted to read them because the tower was too high. Only God knew of Anna’s secrets and much like other diaries, time would eventually wipe away everything. Just like Anna would disappear from our memories one day.

Sadly, this is everything we know of Anna and the church bell didn’t ring anymore after that.