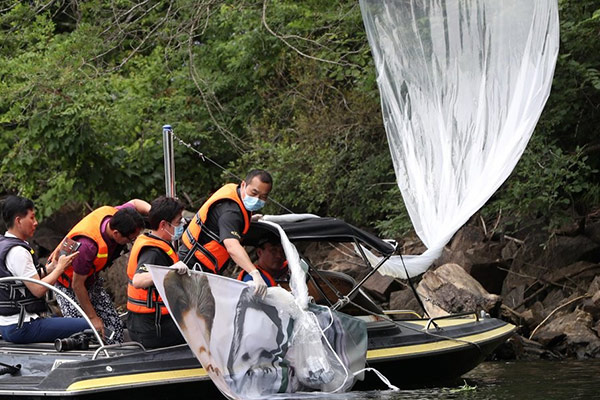 Last month Kim Jong-un’s sister Kim Yo-jong, and the first vice director of the United Front Department of the Workers’ Party, issued a scathing statement denouncing the dispersion of anti-North Korea leaflets. A few days later, the joint liaison office in Kaesong was blown up by North Korea. The regime threatened to dump 12 million propaganda leaflets of its own to the South and the North Korean refugee group Fighters for Free North Korea countered it by vowing to send more, sparking a leaflet war across the border.

Today, we’ll take a closer look at the history of propaganda leaflets. Here’s Professor Bong Young-shik from the Yonsei Institute for North Korean studies to tell us when the two sides started sending leaflets.

Leaflets were used as a weapon of psychological warfare during the Korean War. North Korea sent leaflets to U.N. forces, while the South Korean military sent their own to the North. The leaflet operation stopped when the 1991 Inter-Korean Basic Agreement was signed and the two sides agreed not to condemn each other in 2000.

Older listeners may remember that back in the 1960s or 70s, South Koreans would take North Korean leaflets to police stations and receive pencils and school supplies in return. But that reward program ended in 2007. The government-led propaganda campaign may have ended, but that doesn’t mean that propaganda leaflets disappeared altogether.

The psychological warfare resumed when inter-Korean relations chilled during the Lee Myung-bak administration. This time civilian groups organized the leaflet operations. The watershed moment occurred in 2010. That was the year when the South Korean naval ship Cheonan was sunk and South Korea’s sanctions against the North went into effect on May 24 of that same year. Propaganda loudspeakers were again installed at the border, which Pyongyang considered a grave threat.

Anti-Pyongyang leaflets became a key trigger for inter-Korean conflict in 2008 when the North Korean refugee group Fighters for Free North Korea became involved in the leaflet operation in earnest. The number of leaflets sent over to North Korea was first released in February 2010 and it was found that the group’s leaflets accounted for the lion’s share.

On February 16th, 2010, Fighters for Free North Korea released 30-thousand leaflets from Paju. Since then, the number increased by 100-thousand every time. This set a record high of over one million leaflets sent by Voice of the People, a radio station run by South Korea’s National Intelligence Service.

According to a yearly report on propaganda leaflets obtained by the office of Democratic Party Representative Song Young-gil from the Ministry of Unification, at least 20 million leaflets were released toward the North over the past ten years.

The armistice was signed on July 27th, 1953. A total of 2.8 billion leaflets were reportedly scattered during the three-year Korean War. The South Korean and U.N. forces circulated 2.5 billion copies and North Korea and the Soviet Union, 300 million.

Then most of the leaflet operation was carried out by North Korean refugee groups. The Unification Ministry data show that nearly 20 million leaflets were sent to North Korea from January 2008 to just last month. The actual number of copies may be well over 20 million, because some were sent in secret and omitted from the total. The South Korean government had stopped the civilian groups from sending the propaganda leaflets three times during the Lee Myung-bak administration, eight times under Park Geun-hye, and once during the current administration.

Leaflet distribution has taken different forms over the past seven decades since the end of the Korean War. Since 2012, the North Korean refugee groups not only sent leaflets but also videos showing South Korea’s prosperity. They used to send DVDs in the past, but nowadays USBs or SD cards are the preferred storage devices.

The materials and printing technology for propaganda leaflets also evolved dramatically. Since 2005, Fighters for Free North Korea have been using hydrogen instead of helium to make the balloons carry more than 50-thousand copies at a time. The defectors also began using water-proof papers as well as drones and GPS systems for more precise delivery. The content of leaflets also changed significantly over the years.

Leaflets were a part of psychological warfare during the Korean War. The leaflets encouraged surrender and guaranteed protection once they surrendered. The main objective was to demoralize the enemy.

After the ceasefire, most of the contents advertised how South Korea built new expressways and succeeded in industrialization under the Park Chung-hee government. Meanwhile, North Korea publicized how the country became a workers’ paradise under the leadership of Kim Il-sung.

In the 1980s, when the economic gap between the two sides grew further apart, Pyongyang launched political attacks on Seoul. This included how Chun Doo-hwan’s military dictatorship suppressed freedom of the South Korean people, for example. Meanwhile, South Korean leaflets described the country’s proud achievements like the 1988 Seoul Olympic Games.

Now the question is the effectiveness of anti-Pyongyang leaflets. The balloons carrying the South Korean leaflets are blown over the border by the southwesterly or southeasterly wind. But the wind condition is just right for only about 100 days out of a year. Also, the majority of the leaflets land in the mountains, and even if the leaflets made it to the residential areas in the North, North Koreans can be punished heavily when they are in possession of them, rendering the operation rather ineffective. The number of propaganda leaflets that actually land in North Korea has never been tallied accurately.

North Korean refugee groups claim that most of the nearly 30,000 North Korean defectors in South Korea were inspired to escape by leaflets. But frankly speaking, they aren’t an effective means of psychological warfare, as this method is at the mercy of the wind. The fact is that the winds don’t blow toward the north in autumn. One study found that 85% of the propaganda leaflets failed to land in North Korea and instead landed in South Korea. So, some debate that defector groups should find a more effective means than leaflets to provide information to North Korean residents.

Conservative and North Korean refugee groups claim that the government has no right to infringe on their freedom of expression and the leaflets are essential in improving human rights conditions in North Korea. But residents of Paju near the border strongly oppose the leaflet operations, arguing that their livelihood is protected only when peace is ensured in the border area. Even within the judicial and political circles, one side that deems the banning of propaganda leaflets unconstitutional for it restricts the freedom of expression is pitted against another that advocate the ban to protect the safety of residents in the border areas.

The Korean court ruled that the government has the authority to ban the leaflet operation for the safety of border town residents. Meanwhile, the National Human Rights Commission of Korea argues that the government cannot infringe on the freedom of the press and speech. This is under the pretext of protecting South Koreans from the threat of North Korea.

Under the South Korean Constitution, civilian groups are engaged in legitimate activities. South Korea is a free democracy and restricting the freedom of expression is clearly unconstitutional. The government cannot stop South Korean citizens from informing the truth to North Korean residents. But on the other hand, the most important duty of a democratic government is protecting the lives, properties, and health of its people.

Restricting behaviors that could potentially cause confrontations near the border is the democratic government’s responsibility. I want to say that this is not a clear-cut problem, but an issue that has many differing sides.

The so-called Act on Banning Anti-North Korea Leaflets is expected to be the focus of intense debate in the July extraordinary session of the National Assembly. The ruling Democratic Party aims to pass the law that bans leaflet balloons near the Military Demarcation Line and impose a penalty of up to three years in prison or up to 30 million won in fines for violators. This issue will continue to be a political hot potato for both the ruling and opposition blocs.