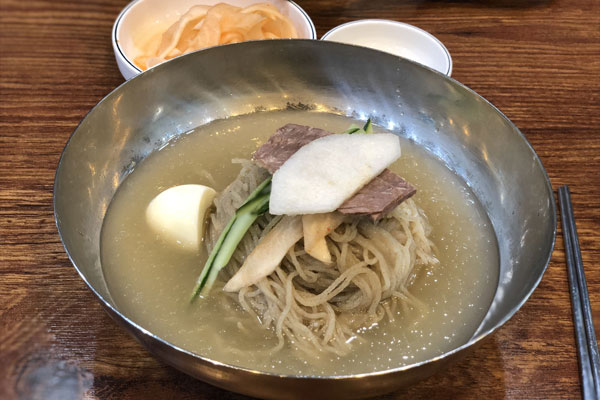 When thinking of Korean icy cold noodles or naengmyeon, the older generation in South Korea might be reminded of this song.

And the younger generation may recall this song.

With the unrelenting heat gripping the country, many South Koreans crave the tasty noodles served in the chilled, sweet and sour broth with thin ice floating on top. The cold noodle dish is said to be extremely popular in North Korea, too.

After the Panmunjom summit, I was stunned to see so many people coming to my small restaurant. At the time, I sold six million won’s worth of naengmyeon a day. I was happy, of course, to see many customers enjoy my naengmyeon and to earn a lot of money as well.

For the inter-Korean summit, North Korea delivered a noodle-making machine to Panmunjom and even dispatched the head chef from the famous Okryugwan restaurant in Pyongyang to the border village so the chef could quickly serve freshly made cold noodles on the leaders’ dinner table.

Foreign media around the world also paid attention to the menu prepared for the historic summit. CNN used the expression, “noodle diplomacy,” saying that the food acts as a bridge of inter-Korean relations.

North Koreans are so fond of Pyongyang naengmyeon that there is a song dedicated to the noodle dish.

Pyongyang naengmyeon is registered as non-material cultural heritage, which is equivalent to South Korea’s intangible cultural heritage, indicating that North Korea is very proud of the tasty delicacy. In the North, people often make the dish at home using a noodle press.

North Koreans love noodles, which symbolize long life. Noodles are therefore a popular meal at wedding ceremonies and 60th birthday celebrations. In the North, people are waiting in line at any noodle restaurant.

To make noodles, the dough is placed into a manual noodle press. Thin noodle strips are then cooked in a boiling hot pot of water. Not every home has a noodle press, though. Village people share noodle makers with their neighbors.

Surprisingly, Pyongyang naengmyeon was originally enjoyed on a midwinter night. According to a late-Joseon era book about seasonal customs, naengmyeon included buckwheat noodles, radish kimchi or napa cabbage kimchi, and pork slices, and the food was generally consumed from the month of November. It is also written that the noodles of northwestern Pyongan provinces are the greatest. The provinces are abundant in buckwheat, which seems to have been used for the cold noodles frequently.

A Korean cookbook published in the late 19th century includes a recipe for this dish. The recipe says you put the noodles in water kimchi with red pepper powder or water radish kimchi, topped with minced beef brisket, pears and cabbage kimchi, with a sprinkling of red pepper powder and pine nuts.

In old times, there were no refrigerators or freezers. So, people would make water radish kimchi in winter and simply put noodles in it. That was the beginning of naengmyeon. We used to receive noodles as state rations. In the winter, noodles are put in water kimchi, while in the summer, in cold cucumber soup. Many just couldn’t afford to make meat broth. But we were happy to share the humble yet delicious food.

Pyongyang naengmyeon was originally North Korea’s delicacy in winter, but it is even more popular in hot summer. At this time of year, North Korean media report about the food and explain its recipe in detail.

The ingredients include buckwheat and starch.

Knead a mixture of buckwheat powder and starch with boiling water to make the dough. Using a noodle maker, press the dough into noodle strips. Boil them for one to one-and-a-half minutes and rinse them in warm water.

To make meat broth, boil pork, beef and chicken in water. When the meat is done, take it out. Add some seasoning to the broth, strain it and cool it down.

For toppings, thinly slice the cooked pork and beef and shred the chicken. Slice cucumbers and pears and cut the hard-boiled egg into quarters. Pan-fry the egg yolks and cut them into thin strips.

Put noodles in a bowl and add the toppings, the egg garnish, shredded red pepper and pine nuts on top. Pour the chilled meat broth mixed with water radish kimchi. The broth might be served separately.

Okryugwan is a famous restaurant known for Pyongyang naengmyeon. Established on the bank of the Taedong River, a scenic spot in Pyongyang, under the instruction of regime founder Kim Il-sung, the restaurant celebrated the 60th anniversary in 2020. The renowned restaurant has some of the best chefs from around the country. Chef Yoon learned the basics of cooking there.

옥류관 mostly selects chefs from head cooks at famous eateries in local regions. It is little wonder the restaurant serves delicious food. After I joined the Korean People’s Army, I was assigned to 옥류관 and was trained there for four months. Then I worked at another restaurant for general-level officers. I served 16 officers for about ten years. Since the generals came from different regions, their tastes all differed. At the time, it was pretty difficult to cater to their palates. Looking back on those years, however, I learned a lot, something I couldn’t learn from books.

Okryugwan is a large restaurant that can seat up to two-thousand customers at a time. It offers exquisite menus including caviar and terrapin dishes, but its signature food is Pyongyang naengmyeon, as you expect.

In summer, the restaurant sells more than 10-thousand bowls of cold noodles a day. It pays careful attention to how to maintain the authentic taste of its naengmyeon. Food hygiene is essential, of course.

The restaurant strictly follows food hygiene principles. It always checks the salinity and conducts tests for bacterial contamination of food. Food safety is the top priority.

Since the restaurant serves so many customers, it consumes 25-hundred kilograms of beef a day. That’s staggering. It uses all cuts of beef—almost all the organs including the head and feet, in contrast to South Korean restaurants that only use beef brisket. The meat broth offered at 옥류관 is much thicker and deeper.

Okryugwan is also known as a place where South Korean presidents visited during inter-Korean summits in Pyongyang. Former president Kim Dae-jung went there in 2000, Roh Moo-hyun in 2007 and Moon Jae-in in 2018.

The restaurant’s naengmyeon shown on TV in 2018 looked a little different from what South Koreans had thought. A poet named Baek Seok, who was born in Jongju in North Pyongan Province, is one of the representative Korean poets in the 1930s. In his poem titled Noodles, he used the phrase “dotted with white” when describing Pyongyang naengmyeon. Apparently, the pale white color refers to buckwheat used for the noodles. But the cold noodles shown in 2018 were far darker, like cold kudzu noodles.

I think the cold noodles served for former South Korean presidents Kim Dae-jung and Roh Moo-hyun stayed true to the original Pyongyang naengmyeon. These days, the food is heavily influenced by China. It’s a shame. It seems the naengmyeon includes more starch now and it looks almost red. You can find such cold noodles in China.

In South Korea, Pyongyang naengmyeon enjoys great popularity among the younger generation these days. Many young people, like pilgrims on their way to the Holy Land, are eager to explore famous restaurants serving the cold buckwheat noodles, in search of the best eateries. It is trendy to take pictures after emptying the bowl of naengmyeon and upload the photos on social media.

There are few things better than a bowl of chilled naengmyeon when the sweltering heat wave sticks around. We hope famous naengmyeon restaurants in North Korea will soon be included in the South Koreans’ list of culinary hot spots.