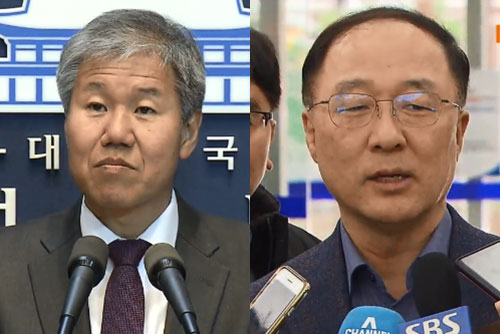 Anchor: Newly appointed heads of economic policy in the Moon Jae-in administration say they will closely work together to reinvigorate the economy by pursuing three key policies of income growth, innovation and fair competition.
Lee Bo-kyung has the story.

Kim says Hong will be the sole control tower of handling and managing economic issues and they will work as one team.

Hong and Kim replaced Kim Dong-yeon and Jang Ha-sung amid a series of rifts over the economy.

Kim says the government has no plan to revise its three key economic principles of income growth, innovation and fair competition, although the pace of pursuing them can be adjusted.

He said the nation should overcome rising income inequality, the low birthrate and slow economic growth by taking an integrated approach combining economic and social policies.

Hong said the government could adjust and complement its income-led policy if unintended problems arise.

He acknowledged the economy is unlikely to grow at two-point-nine percent this year as hoped, but promised to focus on structural reforms to increase the potential growth rate.

On Monday, he said he will closely watch the employment situation, calling it a grave concern.