S. Korean Parliamentary Leaders Return from US Trip Ahead of Summit 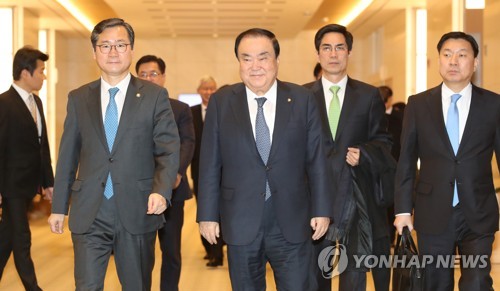 A group of South Korean parliamentary leaders returned home Sunday after visiting the United States ahead of a second summit between the U.S. and North Korea later this month.

National Assembly Speaker Moon Hee-sang and the chiefs of five political parties flew back home early Sunday after making an eight-day visit to the United States for talks with U.S. government officials and congressional leaders.

Moon told reporters that the lawmakers of the two nations reaffirmed congressional support of the value of the South Korea-U.S. alliance and discussed the allies' cooperation to achieve denuclearization of the Korean Peninsula.

Before departing the United States, Moon said he felt the general attitude of the U.S. government and the American people regarding North Korea seemed to have shifted from pessimistic to optimistic.

The trip was mainly aimed at easing concerns about skepticism over North Korea's will to denuclearize and reaffirming the alliance between Seoul and Washington.
Share
Print
List