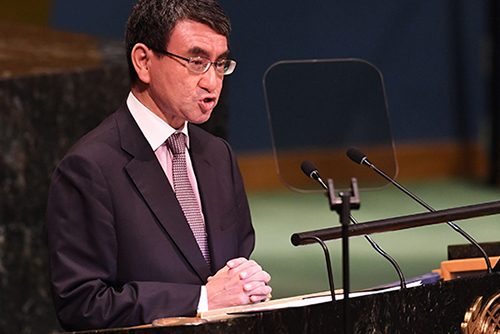 In a news conference on Tuesday, Kono urged Moon to exercise leadership in solving the bilateral issue.

Japan's NHK cited Kono as saying that Japan has been maintaining a restrained response to the issue but can no longer wait now that Seoul says what it can do is limited.

Kono added that if Seoul says what it can do is limited, it should agree to set up an arbitration panel. He also hinted at bringing the matter to an international court, if necessary.

NHK noted that on Monday, the Japanese government asked South Korea to agree to establish an arbitration panel in line with a 1965 bilateral agreement.

Meeting with Seoul's ambassador to Tokyo Nam Gwan-pyo on Tuesday, Japan's Chief Cabinet Secretary Yoshihide Suga reiterated the call for Seoul to accept the request to set up the panel.
Share
Print
List