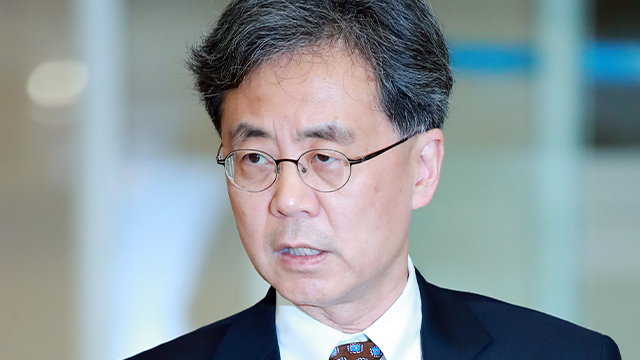 Anchor: A senior presidential aide, who returned from visiting the U.S. amid South Korea's trade row with Japan, said Washington fully understands what is going on and holds similar views with Seoul regarding the matter. Tokyo, meanwhile, rejected Washington's proposal to settle the issue through dialogue.
Choi You Sun reports.

Report: Kim Hyung-chong, the deputy chief of the National Security Office at South Korea's presidential office said all the officials and lawmakers he met in Washington sympathized with Seoul's position regarding Tokyo's recent export curbs.

Returning to Seoul on Sunday, Kim told reporters he managed to fully explain the unfairness of Tokyo's measures and "adequately achieved" his goals from the four-day trip.

Kim was in the U.S. to secure support in the wake of Japanese restrictions on exports of key semiconductor and display materials to South Korean firms, which are widely believe to be in retaliation to a dispute over the wartime forced labor issue.

The senior presidential official said he relayed Seoul's concerns about the potential impacts the trade row could have on regional security and that the U.S. side emphasized Tokyo's restrictions should not impair their trilateral security cooperation in Northeast Asia.

Kim added that officials and lawmakers in Washington were apprehensive about how a shortage in the global semiconductor and display industries could affect the American semiconductor market.

Regarding Japan's claims South Korea may have mismanaged the exported goods and violated international sanctions on North Korea, Kim said he confirmed the U.S. made the "same assessment" as Seoul that the claims are groundless and politically motivated.

In an apparent effort to mediate between its Asian allies, the U.S. reportedly suggested holding a trilateral meeting of officials in Tokyo last Friday, to coincide with U.S. Assistant Secretary of State for East Asia and Pacific Affairs David Stilwell's first Asia tour.

According to diplomatic sources, the U.S. expressed disappointment and was apparently concerned over Japan's lukewarm response to resolving the conflict through dialogue.

Amid the diplomatic standoff, South Korea's Ministry of Trade, Industry and Energy revealed on Sunday the issue will be discussed as a formal agenda item at a meeting of the World Trade Organization's(WTO) top decision-making General Council from next Tuesday to Wednesday.

The move comes at a request from Seoul, which earlier referred the issue to the WTO Council for Trade in Goods in a bid to win the international community's support in reversing Tokyo's move.
Choi You Sun, KBS World Radio News.
Share
Print
List