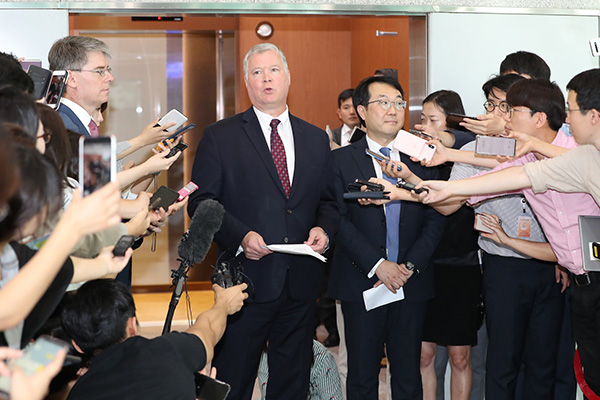 Anchor: U.S. Special Representative for North Korea Stephen Biegun says Washington is prepared to engage in nuclear dialogue with North Korea as soon as it responds. Biegun discussed the issue with his South Korean counterpart in Seoul, reconfirming the Trump administration's continued commitment to denuclearization talks as well as his own commitment to the cause.
Kim Bum-soo has more.

[Sound bite: US Special Representative for North Korea Stephen Biegun]
"President Trump gave me and my team the assignment to restart working-level negotiations with North Korea, as agreed by Chairman Kim, to successfully implement the four commitments the two leaders made in Singapore. I am fully committed to this important mission and we will get this done. Second, regarding the restart of those negotiations, we are prepared to engage as soon as we hear from our counterparts in North Korea."

Lee says Seoul and Washington cannot give up the momentum for dialogue.

[Sound bite: Lee Do-hoon - Special Representative for Korean Peninsula Peace and Security Affairs (Korean)]
"The current situation for dialogue didn't come by accident. This was made by the decision and determination of the leaders of South Korea, North Korea and the United States. South Korea and the United States will closely coordinate and cooperate so that we can continue our needed dialogue (with North Korea)."

The meeting came just a day after South Korea and the U.S. wrapped up their joint military exercise, which North Korea has denounced as a rehearsal for war.

But nuclear negotiations between Washington and Pyongyang have been stalled since the collapse of the Hanoi summit in February.

Speaking to reporters before leaving the foreign ministry in Seoul, Biegun also dispelled rumors that he will soon be leaving the North Korea negotiation team.

[Sound bite: US Special Representative for North Korea Stephen Biegun]
"First, regarding our negotiating team, I want to dispel any rumors that I will be leaving this portfolio to take up an ambassadorship abroad. I will not be taking up a diplomatic posting in the Russian Federation and I will remain focused on making progress on North Korea."

Seoul and Washington are hoping working-level nuclear talks resume by early September so the top diplomats of the U.S. and North Korea may meet on the sidelines of the UN General Assembly later that month in New York.
Kim Bum-soo, KBS World Radio News.
Share
Print
List