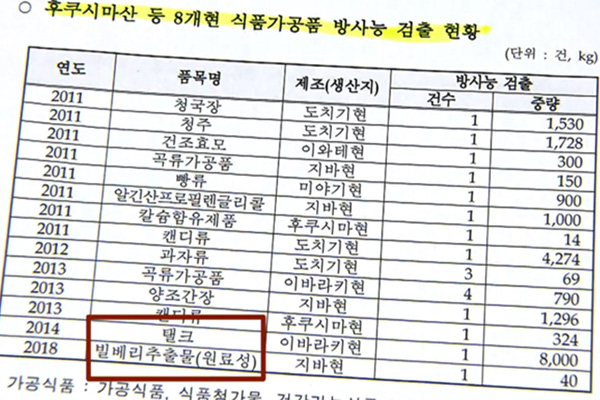 Anchor: Amid a renewed radiation scare sparked by news Tokyo could be considering dumping radioactive water from the 2011 Fukushima nuclear disaster into the Pacific Ocean, KBS has obtained a list of Japanese food imports from which radioactive materials were detected over the past five years. The list includes household food items like coffee and chocolate.
Choi You Sun reports.

Report: The office of South Korea's minor opposition Bareunmirae Party Rep. Chang Jung-sook said nearly 17 tons of radioactive materials were detected in more than a dozen processed food categories imported from Japan between 2014 and June of this year.

KBS has learned popular Japanese chocolate, candy and drip coffee brands were on the list; the drip coffee is currently being sold at Japanese food supply stores in South Korea.

Some of the products, such as talcum powder used to make chewing gum and bilberry extract in dietary supplements, were found to have been manufactured in the nuclear-hit Fukushima and seven other prefectures subject to Seoul's ban on fish product imports.

While the Food Ministry assured all the imports with radiation detection were returned to Japan and were not distributed or sold in the country, experts say the ministry's current 30-minute-long tests should be extended to three hours to detect smaller levels of radiation.

Amid mounting concerns over the safety of Japanese food products, Rep. Chang urged the ministry to seek ways to calm public anxieties over food safety and to disclose information about imports from Fukushima as it had previously announced.

The Seoul city government, meanwhile, plans to inspect 160 items ranging from Japanese fishery products to confection made from Japanese food ingredients over the next month and post the outcome on its official website.
Choi You Sun, KBS World Radio News.
Share
Print
List