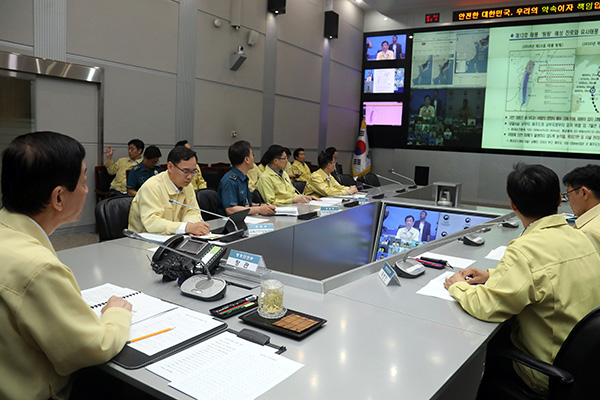 The government is on alert as Typhoon Lingling is forecast to affect nearly all parts of the country this weekend.

The Ministry of the Interior and Safety held a meeting on Thursday morning in preparation of the approaching typhoon, attended by officials of related ministries and provincial government employees.

They examined preventive measures against possible damage to infrastructure and agriculture. They also reviewed the state crisis management system as well as resident evacuation plans to prevent casualties from flooding or landslides.

According to the Korea Meteorological Administration, Typhoon Lingling was moving northward in waters 440 kilometers southwest of Okinawa as of 3 a.m. Thursday.

The typhoon is expected to make landfall in Gyeonggi Province or North Korea's South Hwanghae Province on the west coast of the Korean Peninsula Saturday night.