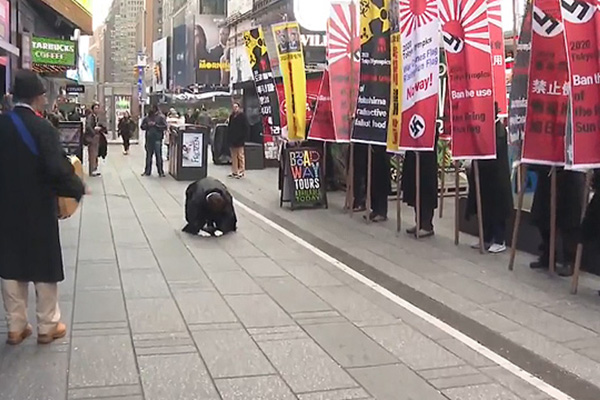 A rally urging Japan to ban the use of its imperial-era "Rising Sun" flag during the 2020 Tokyo Olympics was held in the heart of New York City on Thursday.

The rally, which took place between Manhattan's Times Square and Koreatown, was organized by the South Korea-based groups Heritage of Korean Independence and Chosun Righteous Brotherhood Memorial Society.

Kim Won-wung, the head of the former, performed the Buddhist praying act of "sambo ilbae," which involves walking three steps and making one bow with knees and elbows on the ground.

A group of U.S. residents of Korean descent, donning black and white traditional Korean attire called "hanbok," displayed banners showing the Nazi swastika and the Rising Sun flag side by side, and distributed leaflets explaining why the flag should be prohibited.

The Rising Sun flag is regarded by South Koreans and others in Asia as a symbol of Japan's wartime aggression and militarism in the first half of the 20th century.