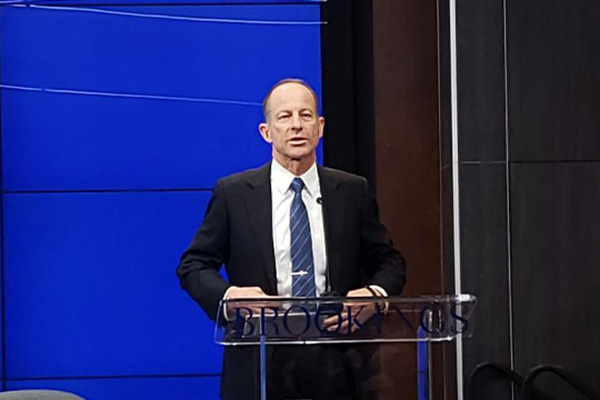 The top U.S. diplomat for East Asia said on Monday that he sees opportunities for further cooperation with South Korea and Japan as the two U.S. allies' capabilities have grown "exponentially" in recent decades.

The comment by U.S. Assistant Secretary of State for East Asia David Stilwell comes as Seoul and Washington are set to hold a fourth round of defense cost-sharing negotiations this week.

At a forum hosted by the Brookings Institution, a private think tank in Washington, Stilwell said that he thinks the U.S. can ask its allies to shoulder greater defense cost burdens.

Stilwell said that he served six years in the past in South Korea and Japan and has seen both countries step up to challenges and their capabilities grow exponentially over the last several decades.

He added he sees opportunities for further cooperation and the ability to use their capabilities as well as the U.S.' in a cooperative way.

Regarding Seoul's recent decision to conditionally suspend the termination of a military intel-sharing deal with Japan, Stilwell said that he's "watching the bow rise," a nautical term referring to an upward trajectory.

He added that he is happy that both Seoul and Tokyo see the importance of getting their relationship squared away and that he continues to encourage such developments.
Share
Print
List