N. Korean Leader Visits Mt. Baekdu ahead of Negotiation Deadline for US 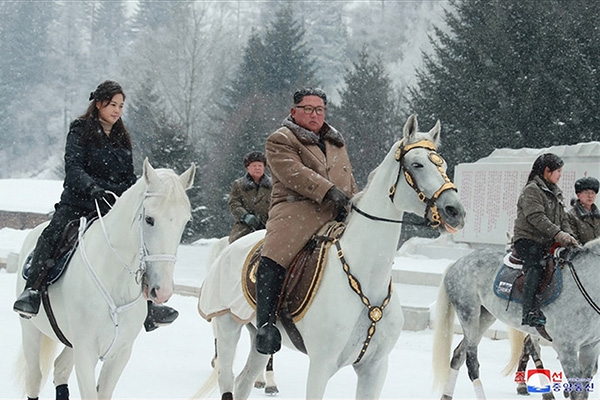 Anchor: In what may be an ominous warning, North Korean leader Kim Jong-un visited the symbolically-important Mount Baekdu. The rare trip, along with a key North Korean political meeting later this month, suggest that Pyongyang may return to more explicit provocations if the U.S. does not adequately change its denuclearization proposal by year's end as demanded by Kim.
Choi You Sun reports.

The news agency said Kim recollected the sacrifices made by the founders of the North Korean state and the bloody battles fought on the mountain.

Kim said it is the consistent will of the ruling Workers' Party to overcome crises with an unyielding aggression based on a great tradition.

He also highlighted the all-out efforts applied to building a wealthy and powerful nation with an "unyielding willpower for self-rehabilitation" in the midst of "unprecedented pressures from and scheming by imperialists."

The North Korean leader's equestrian adventure, the second to Mount Baekdu since mid-October, came as Pyongyang and Washington have been ramping up pressure on each other to make more concessions before year's end.

In April, Pyongyang set a year-end deadline for Washington to make a new proposal in their stalled nuclear talks, warning it could seek a "new way" should the latter fail to do so.

As Pyongyang also promotes Mount Baekdu as the site of an anti-Japanese movement led by regime founder Kim Il-sung, Kim Jong-un's latest trip may be designed to signal determined resistance against the U.S. and may even hint at future military action.

State media has in the past publicized visits to the Mount Baekdu region by Kim ahead of major provocations or announcements, and there is thus speculation that either things may be forthcoming.

Pyongyang also revealed on Wednesday that it will convene a plenary meeting of the Central Committee of the ruling Workers' Party later this month to decide on "crucial issues" in line with the "changed situation at home and abroad."

During the plenary meeting, which will be the first since April, Kim is widely expected to present a detailed roadmap of his "new way." Meanwhile, there is little indication that Washington will significantly alter its position in future nuclear talks.
Choi You Sun, KBS World Radio News.
Share
Print
List