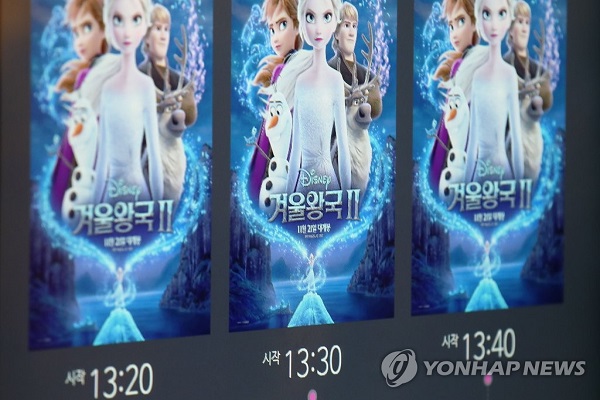 The Disney animated film "Frozen 2" is expected to surpass ten million in attendance on Saturday, on the 17th day of its release.

According to box-office tally from the Korean Film Council, the sequel to Disney's mega-hit "Frozen" marked over nine-point-55 million viewers as of Friday.

If reached, "Frozen 2" will become the 27th movie to attract more than ten million viewers, and the fifth movie to do so this year, following "Extreme Job," "Avengers: Endgame," "Aladdin," and "Parasite."

Meanwhile, the success of Disney's latest animation has also triggered the issue of alleged screen monopoly.

Earlier in the month, a South Korean civic group called the Public Welfare Committee had filed a complaint against Walt Disney Company Korea, claiming that "Frozen 2" had violated the antitrust act by occupying up to 88 percent of domestic movie screens.
Share
Print
List