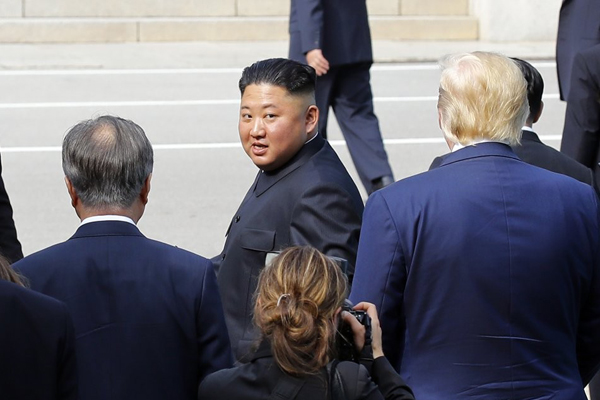 Anchor: U.S. President Donald Trump has sent a stern message to North Korean leader Kim Jong-un, saying he could "lose everything" through hostile acts. Trump's warning came after Pyongyang declared it had conducted a "very important test" at its satellite launching facility in Tongchang-ri.
Choi You Sun reports.

The news agency gave little details but said the academy reported the "successful result" of the test to the Central Committee of the ruling Workers' Party, adding the outcome is expected to play a key role in changing the North's "strategic position" in the near future.

Recent commercial satellite imagery had shown new activity at the testing site, and considering the latest announcement, analysts believe the North could have successfully tested a new engine for a satellite launcher or an intercontinental ballistic missile(ICBM).

During an inter-Korean summit in Pyongyang last September, North Korean leader Kim Jong-un promised to dismantle the facility as part of a self-enforced moratorium on ICBM and nuclear tests.

On Saturday, the North's UN ambassador said denuclearization was off the table. The next day, Pyongyang announced it had conducted a test. Hours later, Trump warned the North Korean leader could "lose everything" if he acts in a hostile manner.

Trump tweeted that Kim Jong-un is "too smart and has far too much to lose," adding that the North has "tremendous economic potential" but must denuclearize as it had promised.

He also wrote that Kim does not want to void their special relationship or interfere with the U.S. presidential election in November.

While Trump sent out that message to Pyongyang, his top security adviser Robert O'Brien left the door open for diplomacy, telling CBS on Sunday that the U.S. still hopes for the North to fulfill the denuclearization pledges it made in Singapore.
Choi You Sun, KBS World Radio News.
Share
Print
List