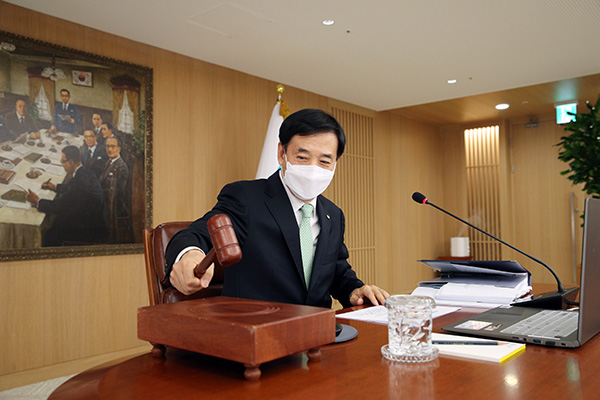 The head of South Korea's central bank raised the possibility of negative growth in the first quarter, saying the impact from the COVID-19 outbreak will likely be felt during the January to March period.

Following the Bank of Korea(BOK) monetary policy board's rate-setting meeting on Thursday, Governor Lee Ju-yeol said the outbreak is the biggest difficulty the economy is currently facing. He added that the fallout is expected to be greater than that from past infectious diseases.

Assessing that the real economy has already begun to contract due to the epidemic, Lee cited the biggest contractions in consumption and the domestic service industry.

Regarding the BOK's lowered growth outlook for the year from two-point-three percent to two-point-one percent, Lee said the estimate is based on a scenario that the situation will likely begin to stabilize after reaching a peak in March.

As for the central bank's decision to keep its policy rate steady at one-point-25 percent, Lee insisted that microeconomic or industry-specific support may be more useful than a base rate reduction for now.
Share
Print
List