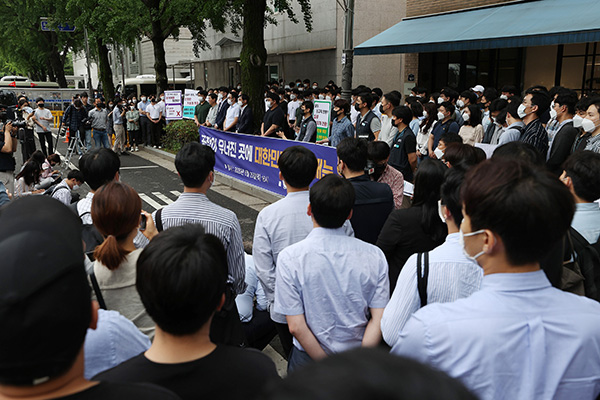 Anchor: Incheon International Airport, which has been a sought-after workplace among college graduates due to its job security and perks, is facing a backlash over plans to grant permanent employment status to almost two-thousand contract or part-time workers.
The union there is now calling for the resignation of the CEO, accusing him of reverse discrimination.
Sam Len reports.

Report: Unionized workers at South Korea's largest airport say they have launched a drive to oust their CEO, accusing him of bending the rules to give permanent employee status to security workers.

Incheon International Airport's union issued a statement on Thursday saying it will seek to oust CEO Koo Bon-hwan for bulldozing ahead with the plan, which they say goes against the terms of a labor-management contract.

Of the total, around one thousand-900 security staff will be hired directly by the airport, while about seven thousand-600 workers will be employed under the airport's three affiliated companies as full-time staff.

But the labor union is claiming that management is violating the equal rights of existing staff, while shifting a large number of temporary workers to permanent status could infringe upon the areas of work of existing permanent employees. The union also claims that the plan could lead to lowered wage-growth targets by management due to increased overhead costs.

The squabble comes as the airport is expected to suffer its first loss since 2003, due to a sharp drop in airline passenger traffic due to the coronavirus pandemic.
Sam Len, KBS World Radio News.
Share
Print
List