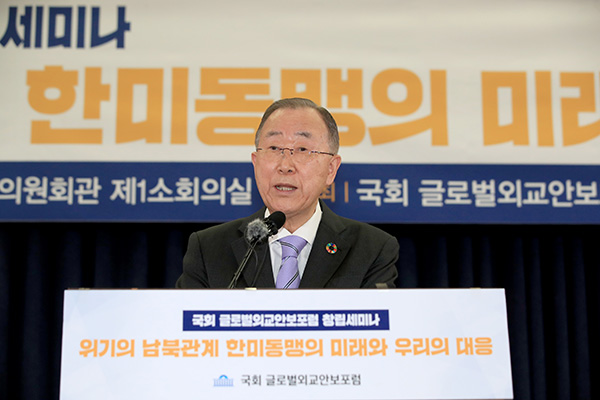 Former UN Secretary-General Ban Ki-moon urged the South Korean government to be wary of being dragged around by North Korea as Seoul seeks to quickly improve soured cross-border relations.

In a keynote speech at a global diplomacy and security forum at the National Assembly on Wednesday, Ban said South-North relations should be approached based on the principles of mutual respect and reciprocity.

Describing the Moon Jae-in administration’s North Korea policies as “astounding and deplorable,” he argued that taking a unilateral stance to understand and support Pyongyang will put Seoul in a position of being continuously pushed around by the regime.

Ban claimed that unrequited love toward the North is not only unhelpful in resolving inter-Korean issues, but does not go in step with what he called the “cold-hearted” nature of global diplomatic circles.

Addressing Moon’s recent reshuffle of key posts regarding inter-Korean and national security issues, Ban said efforts to resolve conflicts in the short-term will put South Korea in an increasingly difficult position and called on the government not to beg the North.