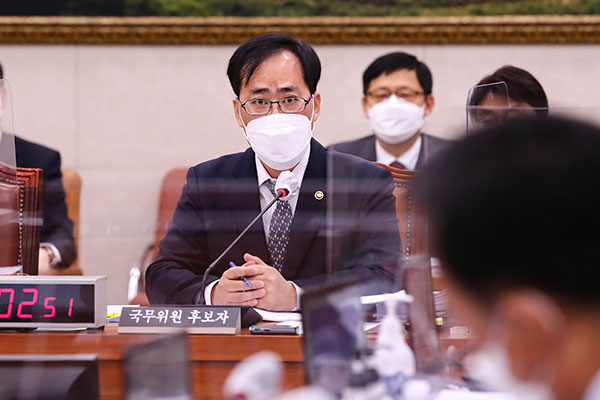 Anchor: Parliamentary confirmation hearings for five Cabinet minister nominees are under way, with the opposition focusing on scrutinizing a range of ethical lapses and even customs duty violations by the nominees and their family members.
Choi You Sun has the details.

The PPP urged the nominee to resign, accusing her of being unable to separate her personal life from her public duties.

Struggling to defend the nominee, the ruling Democratic Party(DP) said her family accompanying her on official trips jars with public sentiment.

Lim apologized for allowing her two daughters to stay in her state-funded hotel rooms, but added that she had personally paid for all the rest of their travel expenses.

The nominee is also suspected of applying for the chair at the state-run National Research Council of Science and Technology(NST) last November, despite being registered with the ruling party.

At a confirmation hearing for Land Minister nominee Noh Hyeong-ouk, Noh apologized for allegations that he made a profit from selling an apartment unit he bought through a special installment scheme for public officials.

The nominee also issued an apology regarding allegations that he falsely registered his address to send his children to schools in the affluent Seocho district in southern Seoul.

Fisheries Minister nominee Park Jun-young also apologized when cross-examined about claims that his wife evaded customs duty while bringing in high-end pottery from Britain and then sold it illegally. Park vowed to do whatever was required by customs authorities.
Choi You Sun, KBS World Radio News.
Share
Print
List