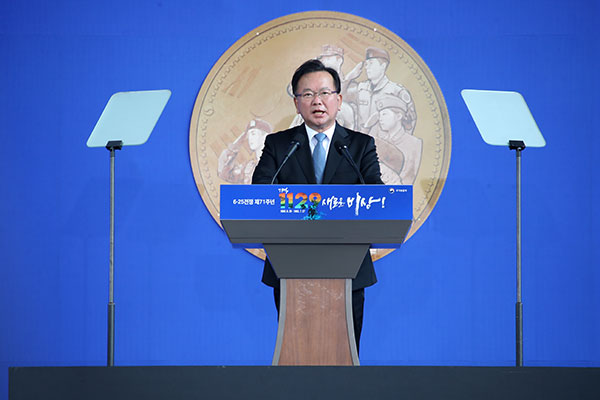 Anchor: A ceremony marking the 71st anniversary of the outbreak of the Korean War was held Friday in Busan for the first time. The event remembered the fallen heroes and also reaffirmed the nation’s commitment to overcoming current challenges, including the pandemic.
Our Kim Soyon has more.

Report: A government ceremony marking the anniversary of the outbreak of the Korean War took place in Busan for the first time on Friday. The southern port city served as a temporary capital during the conflict that lasted from 1950 to 1953. It is also home to the world's only United Nations Memorial Cemetery.

Korean War veterans arrived at the event as an honor guard stood by and a military band performed.

The South Korean flag, the UN flag and the flags of the 22 countries that fought in the Korean War also appeared on stage, signaling the start of the ceremony.

Delivering a speech, Prime Minister Kim Boo-kyum said the country will forever cherish the sacrifice of the fallen heroes and vowed to continue the proud legacy of respecting and honoring the patriotism of war veterans.

Kim said the government will never give up its pursuit of peace and prosperity on the Korean Peninsula.

The prime minister also bestowed the Order of Military Merit to one surviving veteran and the families of three deceased soldiers, in honor of their wartime service.

Some 240 guests including government officials attended the ceremony held at Busan Cinema Center, which was the site of an airfield used by UN forces during the war.

Various other events took place nationwide to mark the anniversary hosted by local authorities and the Korean War Veterans Association.

Approximately 140-thousand South Korean troops were killed in action during the three-year conflict that broke out on June 25, 1950, with another 450-thousand injured.