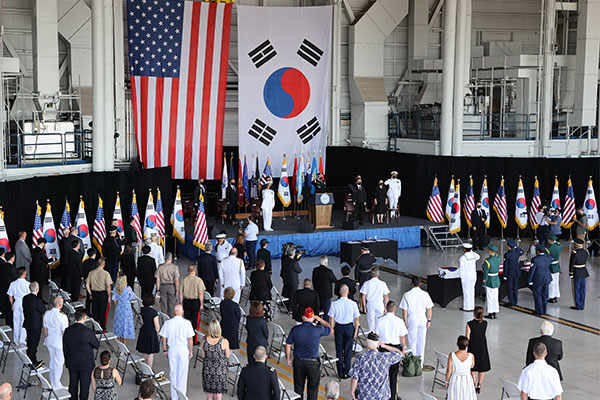 President Moon Jae-in on Wednesday said declaring a formal end to the Korean War will offer new hope and courage to everyone wishing for peace around the world.

During Seoul and Washington's joint repatriation ceremony for war remains at Hickam Air Force Base in Honolulu, Hawaii, Moon said complete peace on the Korean Peninsula is what the fallen heroes would want most.

This comes after Moon, while addressing the United Nations General Assembly on Tuesday, suggested that the two Koreas, the U.S. and possibly China jointly push for the end-of-war declaration to open an era of reconciliation and cooperation.

The president said based on the alliance with the U.S., which has become a comprehensive partnership of shared values, the two sides will remain steadfast in efforts to achieve the peninsula's complete denuclearization and establishment of lasting peace.

The U.S. handed over 68 sets of remains of Korean soldiers killed during the three-year conflict, while South Korea handed over six sets of American service members' remains.

The Korean War armistice was signed in July 1953 by military commanders from the U.S., representing the United Nations Command, North Korea, and China. No peace treaty was ever signed in the conflict.
Share
Print
List