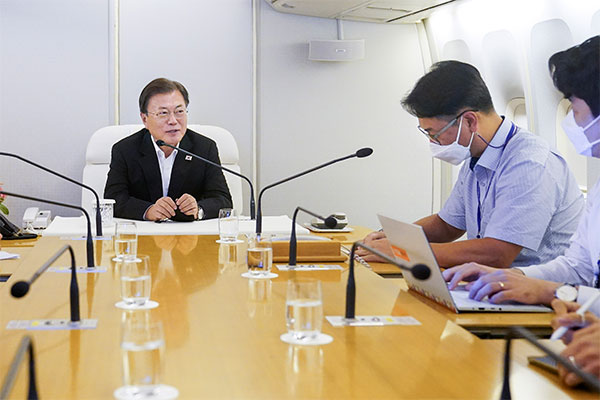 The president made the remarks to reporters on Thursday during an in-flight briefing on his way back to Seoul after a five-day trip to the U.S.

Moon said that he believes North Korea is keeping the door open for dialogue as it is sticking to its own moratorium on nuclear and intercontinental ballistic missile tests.

He added that North Korea appears to be making various considerations, keeping the door for dialogue open.

Moon also said that South Korea sought a breakthrough in the deadlocked inter-Korean relations on the occasion of the UN General Assembly, as this year marks the 30th anniversary of the two Koreas joining the UN simultaneously, but it didn't work out.

Regarding his proposal to declare a formal end to the Korean War in his speech at the general assembly, Moon said that there has been agreement on the matter from the U.S. and China for a long time.
Share
Print
List