Relic of 1st S. Korean Catholic Priest to Be Enshrined in Burkina Faso 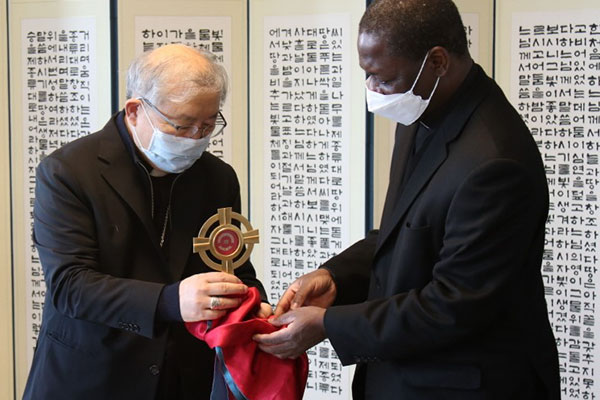 Some of the remains of the nation’s first Catholic priest, St. Andrew Kim Tae-gon, will be enshrined in Burkina Faso.

Cardinal Andrew Yeom Soo-jung, the archbishop of Seoul, delivered a vessel containing the relic on Tuesday to a counsellor of the Apostolic Nunciature in the Philippines, Monsignor Julien Kaboré, at the Catholic Archdiocese of Seoul.

The remains will be enshrined at the Cathedral of Saint Joseph of the Archdiocese of Koupela, which was built with funds raised by members of the Yeouido parish of the Catholic Archdiocese of Seoul.

Kaboré, who’s from the West African country, previously had conveyed to Yeom his wish to enshrine some of Kim’s remains in the Cathedral of Saint Joseph as this year marks the 200th anniversary of Kim’s birth.

Kaboré is said to have been deeply moved by the history of the Korean Catholic church’s martyrdom while serving in a post in the Apostolic Nunciature in South Korea.
Share
Print
List