DP Interim Leader Pleads for Another Chance ahead of Local Elections 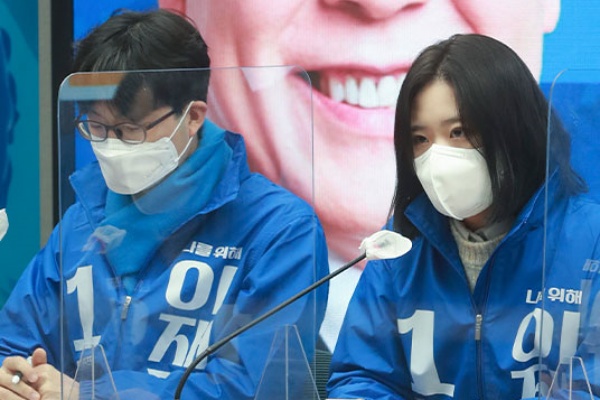 Park Ji-hyun, co-chair of the Democratic Party's(DP) interim leadership committee, has apologized for her party's misdeeds and asked voters to give the main opposition DP another chance in the upcoming June 1 local elections.

The 26-year old party co-leader called an emergency press conference Tuesday morning amid recent polling that showed support for the DP was plummeting ahead of next week's ballots.

Park said she knows it is a shameless thing to repeatedly apologize, but pleaded for another chance, pledging that she would take on the responsibility of reforming the party from one driven by blind political loyalty to one that focuses on the general public.

The interim leader said her party will change its culture which applies a double standard of covering up misdeeds by those within its camp while slamming similar acts by those on the rival's side.

Park urged party members not to surrender to forces that criticize different opinions within the party, but to embrace challenging ideas as part of efforts to reform and innovate.

She pledged to make the liberal party one that is younger and forward-looking, one that keeps the promises that it makes, including adopting a law for equality.

The DP has come under fire for a series of sexual misconduct allegations involving is party members, as well as its double standard approach to scandals involving the ruling People Power Party.
Share
Print
List