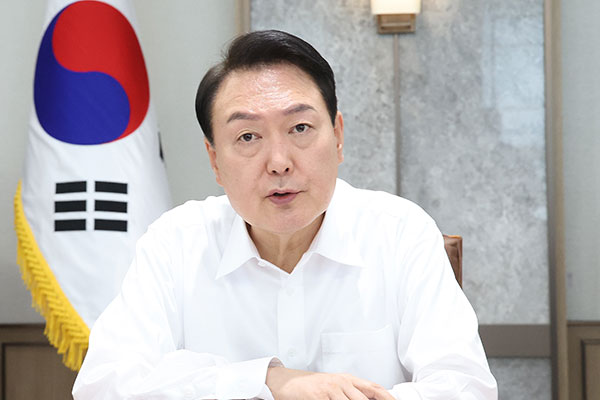 President Yoon Suk Yeol stressed future-oriented cooperation in a meeting with a delegation of Japanese business leaders who are visiting Seoul for a resumption of talks with their South Korean counterparts.

According to the presidential office, Yoon received the delegates from the Japan Business Federation in his office on Monday afternoon and was briefed on the outcome of their meeting with representatives of the Federation of Korean Industries(FKI) earlier in the day.

During the closed-door meeting, the top office said Yoon stressed the need for South Korea and Japan to combine forces to forge forward-looking relations.

Citing the advent of the era of economic security, the South Korean leader urged the business leaders from both countries to continue communicating with each other to help expand bilateral cooperation between the countries.

He also said the governments of both countries should work together to address pending issues between them, apparently referring to the issues of Japan’s wartime forced labor and sexual slavery.
Share
Print
List