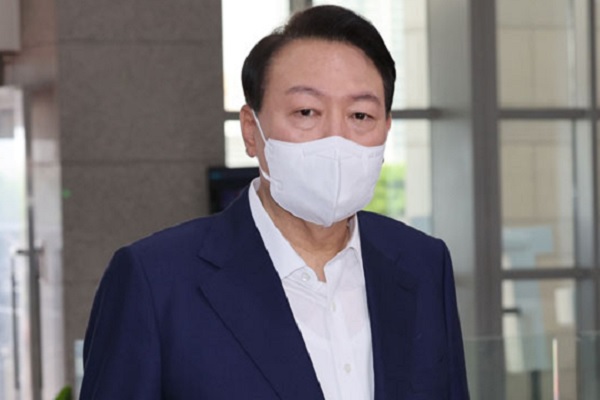 In the message captured by photojournalists as Kweon was using his smartphone during a parliamentary interpellation session on Tuesday, Yoon touted the ruling party’s recent performance and attributed the change in the party to the replacement of a party leader who he said had been "shooting upon ourselves."

The “leader” in the message appeared to refer to Lee, who was handed a six-month suspension earlier this month by the party’s ethics committee over allegations that he ordered the destruction of evidence related to sexual bribery.

It is effectively the first public insight into the president’s negative view of the 37-year-old chair, who was assessed by some to have significantly contributed to Yoon’s razor-thin victory in the presidential election in March.

Kweon, a close ally of Yoon, apologized to the public and party members later on Tuesday for causing a “misunderstanding” with the disclosed Telegram correspondence with the president.

Not denying that the message was sent by Yoon, Kweon said on Facebook that the president was thought to have picked a phrase used by some to simply convey his gratitude to Kweon and other party members.

Lee has yet to respond to the Telegram messages.

Questioned by reporters on Wednesday, Kweon again apologized for causing concern to the public by his carelessness in leaking a private text.
Share
Print
List