Prime Minister Thanks UN Forces for Sacrifices Made in Korean War 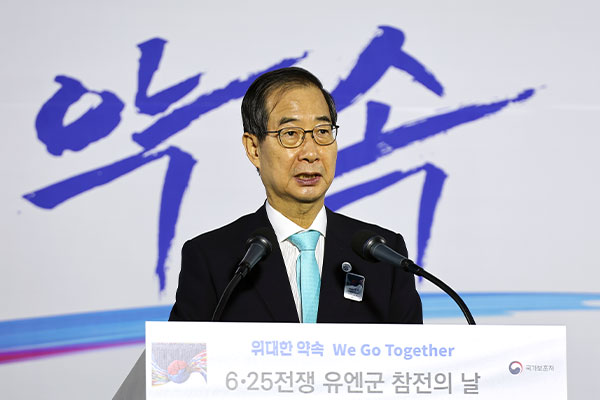 Prime Minister Han Duck-soo has expressed gratitude to the UN forces that fought in the Korean War, saying South Korea would not be here today without their sacrifice and devotion.

Han made the remark during a ceremony in Seoul marking UN Forces Participation Day on Wednesday.

The prime minister said each and every South Korean enjoying freedom and prosperity today is indebted to the roughly 19-and-a-half million UN troops that fought in the Korean War.

He noted that young people from 22 countries fought for one-thousand-129 days and some 37-thousand of them lost their lives while around 113-thousand went missing or were wounded.

Han said that thanks to their sacrifice, South Korea has transformed from a country that once received international aid into a country that now provides such support.

The government designated July 27 as UN Forces Participation Day in 2013 to honor Korean war veterans and remember the noble service of the UN forces in the Korean War.
Share
Print
List