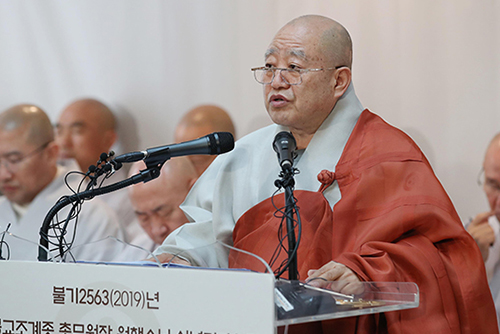 The head of South Korea’s largest Buddhist sect has announced plans to launch various inter-Korean projects with its North Korean counterpart this year.

The Most Venerable Wonhaeng, chief administrator of the Jogye Order, revealed the plans at a press conference on Wednesday, stressing the new year will expand the horizons for inter-Korean Buddhist exchanges.

He said discussions will be made with related government agencies regarding plans to launch a temple stay service at North Korea’s Singye Temple on Mount Geumgang. He also vowed to prepare for other projects with the North such as dispatching Buddhist monks to the North and building Buddhist facilities.

Singye Temple is one of the four most well-known Buddhist temples on Mount Geumgang. It was restored in 2007 under a joint project facilitated by the first inter-Korean summit in 2000.