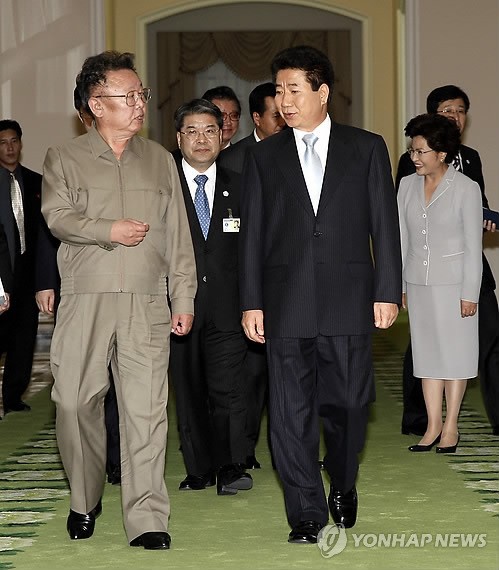 The 2007 inter-Korean summit concluded with the October fourth joint declaration. However, the process that led up to this historic event were not entirely smooth. The summit talks between President Roh Moo-hyun and North Korean leader Kim Jong-il were originally scheduled for late August, but were delayed after North Korea suffered serious flood damage from heavy rains at the beginning of that month. Seven years had passed since the first inter-Korean summit in 2000. Since the 2000 joint declaration stipulated that Kim Jong-il would make a return visit to Seoul, a second summit seemed unlikely. Nevertheless, the South Korean side did not insist on holding the summit in Seoul but relented toward a change of venue to Pyongyang

From Pres. Roh's Departure to the Signing of the October Fourth Declaration

Outline of the Declaration by Paragraph

Declaration on the Advancement of South-North Korean Relations, Peace and Prosperity.
In accordance with the agreement between President Roh Moo-hyun of the Republic of Korea and Chairman Kim Jong-il of the National Defense Commission of the Democratic People’s Republic of Korea, President Roh visited Pyongyang from October 2-4, 2007. During the visit, there were historic meetings and discussions.
At the meetings and talks, the two sides have reaffirmed the spirit of the June 15 Joint Declaration and had frank discussions on various issues related to realizing the advancement of South-North relations, peace on the Korean Peninsula, common prosperity of the Korean people and unification of Korea.
Expressing confidence that they can forge a new era of national prosperity and unification on their own initiative if they combine their will and capabilities, the two sides declare as follows, in order to expand and advance South-North relations based on the June 15 Joint Declaration: