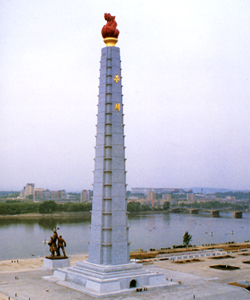 ‘Juche’ is North Korea regime’s official ideology. Because it theoretically justifies the one-man rule under Kim Il-sung, ‘Juche’ can be thought of as an institutionalized version of the cult of personality. The term ‘Juche’ was first mentioned officially in a speech given by Kim at a ‘Propaganda and Agitation’ Congress of the KWP on December 28, 1955, entitled “On establishing self-reliance and eradicating dogmatism and formalism in ideology projects”.

Stalin’s death had sparked a move away from the Stalinist model of power in the Soviet Union. This was regarded by Kim as a possible threat to his one-man rule, since Soviet influence on North Korea was strong at the time. The ‘Juche’ ideology was devised to shut out such negative influence.

‘Juche’ was initially introduced as a guideline for ideology-related projects at the time. However, the gradual elimination of various anti-Kim factions within the KWP engendered a generalization in the term’s usage. ‘Juche’ was used to refer to economic self-reliance and self-defense in the military context. When the Soviet-China rift widened and revisionist debates flared up, ‘Juche’ was applied as a diplomatic guideline as well.

Following the completion of the one-man rule system and the widespread adoration of Kim, ‘Juche’ came to be referred to as the ‘Monolithic System of Thought’. The term was intended to realize political/ideological unity within North Korean society. At the 5th KWP Congress of 1970, ‘Juche’ was crystallized in the KWP Statutes as the official ideology of the Party.

Furthermore, the revised constitution of 1982 adopted ‘Juche’ as the official ruling ideology of North Korea. In 1974, ‘Juche’ was officially renamed ‘Kim Il-sung-ism’ (or simply ‘Kimism’), as “a new and unique system of revolutionary thought, theory, and methodology that reflects the needs arising from an era of self-reliance”. ‘Kimism’ was expressly distinguished from Marx-Leninism, and the former was claimed to be superior to the latter in later years.

The fact that Kim Jong-il was officially declared the successor to power in 1974 implies that ‘Juche’ is closely linked not only to Kim Il-sung’s ‘monolithic’ one-man rule but also Kim Jong-il’s ascension to power. Starting in 1982, more concrete interpretations of ‘Juche’ in political, economic, and military contexts were laid down as North Korea’s operating principles. Kim Jong-il claimed that his father first proclaimed the establishment of the ‘Juche’ thought at a cadre meeting of the ‘Anti-Imperialism Youth Federation’ held in Manchuria as early as June 1930. Considering the fact that Kim Il-sung fought with the Chinese Communist Party’s anti-Japanese forces during the 1930s and worked for the Soviet 88th Special Brigade in the early 1940s, this claim is most likely untrue.

The specifics of ‘Juche’ thought have changed as circumstances demanded. It was initially introduced as being based on the philosophical position that “Man is the master of all things, and must decide everything for himself”. While man was supposedly a social and historical subject who utilized his independence, creativity, and consciousness to determine his own fate, this process was conditional on the ‘proper guidance of a commandant’.

Therefore, the role of the commandant was essential in establishing self-reliance. This is the so-called ‘revolutionary commandant’ view of ‘Juche’.
In 1986, the ‘sociopolitical organism’ view was added as well. This view stated that “the subject of the revolution is none other than the organic body that comprises the Commandant, Party, and the People”, which is seen to be “a sociopolitical organism in that all three of its components share a single fate”. This view later involved into the ‘lineage’ view, which served to justify Kim Jong-il’s ascension to power.

’Juche’ in the Kim Jong-il Era

The usage of the term ‘Juche Thought’ itself became less frequent in the Kim Jong-il era. However, this does not mean that it has lost its authority as the regime’s ruling ideology. Instead, the newfound importance of its subordinate concepts can be interpreted as having overshadowed the apparent dominance of ‘Juche’ itself. That is, while propaganda of the general term ‘Juche’ has become less extensive, new subordinate concepts such as the ‘Red Knight Thought’, ‘Strong Fatherland’, and ‘Military First’ all trace their roots to ‘Juche’.